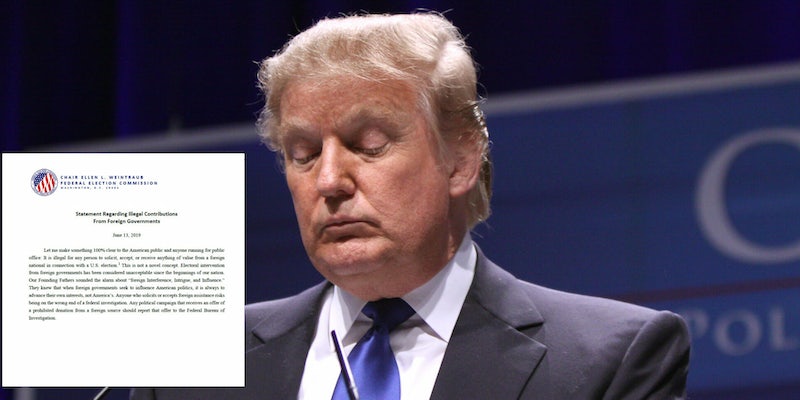 Even she was surprised she had to say something.

President Donald Trump caused another one of his patented mini-national panics this week, when he told ABC’s George Stephanopoulos that he would have few qualms about accepting foreign interference in the 2020 election.

The statement brought backlash, consternation, and calls for impeachment. And now, it’s prompted the chairwoman of the Federal Elections Commission to issue a statement, and she gave a very serious eye roll at the commander-in-chief when she shared it online.

I would not have thought that I needed to say this. pic.twitter.com/T743CsXq79

Ellen Weintraub tweeted the statement, saying she couldn’t believe she had to do it. But that’s where we are these days. Weintraub says not accepting foreign aid is not a “novel concept” and that it was something the founding fathers considered “unacceptable.”

She concluded by noting that any political campaign that accepts “foreign assistance” risks being on the wrong end of a federal investigation.

Something Trump probably should already comprehend.