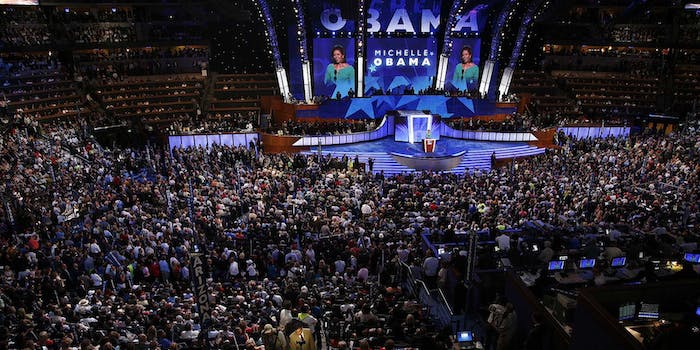 Bitcoin's value is constantly changing, and its users are anonymous. What does that mean for political donations?

It looks like Mr. Nakamoto is going to Washington.

The Federal Election Commission is currently fielding a request to establish ground rules for political donations made via Bitcoin, the digital cryptocurrency developed by a mysterious person or group under the name Satoshi Nakamoto. With an increasing number of candidates expected to accept Bitcoin donations during the next election cycle, attorneys for the Conservative Action Fund PAC want the FEC to make the legalities of accepting the experimental currency perfectly clear.

“This represents the importance of adapting campaign finance law to changing technology,” said Dan Backer, the attorney who filed the FEC request.

Backer told the Daily Dot there are many questions that need to be answered before candidates and political action committees start accepting Bitcoin en masse. Because of its constantly fluctuating value and anonymous nature, Backer said the FEC needs to provide guidance for parties required to adhere with campaign finance law.

The need may be urgent. Though Bitcoin donations during the most recent election cycle were limited to what Backer described as a “small number of idiosyncratic campaigns,” he expect a the booming growth of value and public interest in Bitcoin this year will prompt more campaigns to start accepting such donations next year.

“Whenever a new form of payment comes along, be it through credit cards online or Paypal, there is a rush to give your donors what they want,” Backer said.

Bitcoin payments are expected to be particularly popular with more libertarian-oriented candidates. Though Bitcoin has largely grown due to its popularity with online black- and grey-market merchants, its enjoyed more ideological pure support from libertarians who value the potential of a currency unregulated by any government.

However, this lack of regulation is what may make it difficult for groups and candidates to accept donations without definition from the FEC. There are strict limits on how much an individual may donate to candidates and certain PACs. According to Politico, in the current cycle, “federal law limits donations to $2,600 per individual per election to candidates and to $32,400 to political parties. PACs may give up to $5,000 per candidate, while other outside groups can make unlimited independent expenditures.”

The problem is though, Bitcoin’s value is ever-changing. At the beginning of the year, Bitcoins were worth less than $15 a piece. Now they regularly trade at more than $100 and at times have been worth more than $260. This poses a quandary for candidates, because if someone donates $2,000 in Bitcoin, then the price of Bitcoin suddenly increases by 50 percent before the campaign spends it, the person may have unintentionally exceeded the donation limit by $400.

This is a very likely situation, according to Backer. If PACs and candidates expect Bitcoin to keep gaining in value, they have an incentive to hang onto it before converting it to dollars and spending it. He said that’s why the FEC needs to decide if the recorded value of donations will be based on the value of Bitcoin upon receipt or liquidation.

Another issue regarding the use of Bitcoins is anonymity. The currency was fundamentally designed to provide anonymity for its users—giving consumers online a way to spend money like cash. But campaign finance law has evolved over the years to require strict record-keeping. Anonymous donations can’t exceed $50. But Backer said anonymity would likely be less of an issue, since candidates and PACs actively work to compile as much information as possible about any and all donors in order to further solicit them in the future.

But the potential for campaign donations isn’t the only reason politicians are taking an interest in Bitcoin. Following a Drug Enforcement Agency crackdown this summer, Washington lawmakers have begun meeting with some Bitcoin advocates to begin discussing possible regulations.

The FEC has up to 60 days to respond to respond to the request for Bitcoin donation clarification, but may file for an extension.