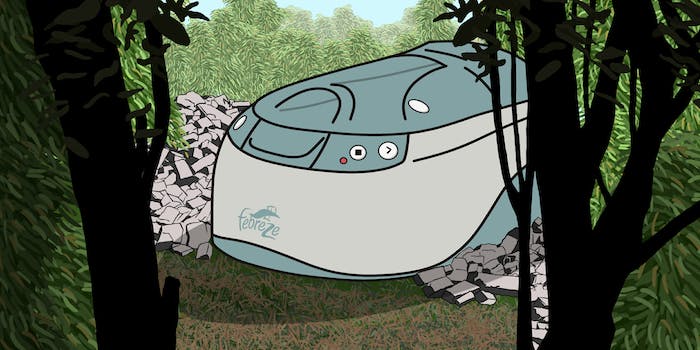 In 2004, Febreze released Scentstories, a profoundly weird device that wanted to create a symphony of smells.

Close your eyes. Now imagine you’re exploring your favorite hike. Maybe it’s off the coast of Kauai or in the Pacific Northwest. You’re following a winding creek, and you can smell the mist, subtle but unmistakable. Now you’re walking past wildflowers, then stop to gaze at a switchback to gaze up at the tall fir trees. It smells a bit like Christmas.

This is the strange magic of the Scenstories player, a product Febreze launched in 2004. The clunky clamshell device combines the trappings of an audio device with the function of a candle. It’s profoundly weird.

“You can play scents… like you play music!” one commercial from the time proclaimed. “Every disc plays five complimentary scents, a new scent every half hour. A new experience with every disc: play it over and over by simply pushing play!”

You can still find the Scentstories player and its various discs on eBay and online retailers like Amazon. Or you can visit it at the newly opened Museum of Failure, which sits across from other tourist destinations like Ripley’s Believe it Or Not and the TCL Chinese Theater in Los Angeles. The museum showcases a collection of bygone ephemera like Colgate-branded Lasagna, Bic for Her, and Heinz EZ Squirt purple ketchup. There’s a Henry Ford quote on the doorway, “Failure is simply the opportunity to begin again, this time more intelligently.”

For $19, patrons can view the Febreze Scentstories player in a glass case. But Scentstories doesn’t fit in the museum. It’s the “Crystal Pepsi of home scents.” It’s actually the “Odorama” of music players: imaginative, whimsical, and completely experiential. It’s a lost relic from an era when brands weren’t afraid to try things lest they be mocked online and when CDs ruled the world.

It’s a device that was ahead of a time that never came.

Christophe Laudamiel, a creative perfumer working for P&G with “eclectic music taste,” often played CDs in his office while working. He pitched the idea of a way to play scents in the same way that we play music.

“Opera is telling me a story through music itself. I’d like to do the same for fragrances,” Laudamiel told Diersing, “We were all kind of scratching our heads. While the idea is obvious, the how is not so obvious. How do you make it relevant? How do you make it tell the story of what it is intended to do? And he pulled out one of his compact discs.”

Executives at Febreze latched onto Laudamiel’s symphony for the nose because it solved the problem of habituation—the idea that our noses get used to certain smells when given enough exposure. By adding new scents every five minutes within a 30-minute disc, customers would never habituate to the scents. And like CDs, the smell would only be “on” when buyers were in the mood to “play” it.

“My nose never gets bored,” a serene yoga-panted woman giggled in one commercial. “No more ‘one-scent-wonders’ for me!”

By using the clamshell-style player, Laudamiel’s design presented buyers with a simple comparison to one of the most beloved devices at the time: the CD player. More than 767 million physical music CDs were sold in 2004, as compared to 34.2 million in 2017. Brands of the era were constantly looking for ways to reach out to customers using music and pop artists. In 2001, for example, McDonald’s released a Britney Spears/*NSYNC album available only with Happy Meal purchases.

Febreze tapped Shania Twain as its spokesperson. The country music star worked with the company to develop her own Scentstory, with titles such as “Shania’s Wishes for Spring,” and her song “Forever and For Always” was used in a major advertising campaign.

This is how my family came to own a Scentstories. My sister begged my parents to buy a Febreze Scentstories player for our apartment. As a family, we weren’t candle or plug-in people, and we were repulsed at anything that could inflame our terrible seasonal allergies. But, my sister and I were Shania Twain fans, and we were convinced that the player would unlock Twain’s exclusive Febreze album. We weren’t alone.

The marketing campaign “was actually too clever,” McGowan said. “It backfired. It wasn’t effective at communicating the benefits and it brought all those other confusing messages.” Customers believed the player would double as a audio boombox. Adding to the confusion, Febreze released a promotional bonus Shania Twain DVD with proof of purchase.  “We did involve Shania in the fragrance selection,” Diersing said. “These were some of her favorite scents and we should have said that. Sometimes you’re too close to the work.” (In case anyone is wondering, Shania Twain’s wishes for spring in scent form were “daffodils swaying in the breeze,” “hanging sheets on the line,” “breezes through the window,” “mouthwatering citrus” and “picking lily of the valley.”)

Early press for Scentstories was positive. The New York Times called the player an “olfactory jukebox” and compared the experience to a “guided meditation.” But consumer confusion about the player’s abilities and its high upfront ultimately led to Scentstories’ downfall. At $34.99 a player, plus extra for discs, customers simply preferred to buy a $2 aerosol from the same aisle.

“Consumers did like it, if we got it into their hands,” McGowan said. “But they weren’t going through the discs fast enough, and we were in trouble.”

P&G hoped to get other industries on board. The company created a coffee-scented CD for a popular chain that Diersing said smelled great, but it didn’t work out. And it didn’t help that iPod, which debuted three years prior, was significantly shifting the way the consumers listened to music.

By 2006, P&G made the decision to license the product to the Yankee Candle Company, but the product was discontinued in 2008.

The player also helped launch Christophe Laudamiel’s perfumier career. He created what he calls “scent sculptures” but you know as the “branded scents” you smell in hotels or retail stores. Abercrombie employed him to make the cologne that pumped in the air as you shopped for crop polos back in the day.  Ralph Lauren, Estee Lauder, Tom Ford, and Burberry lined up to work with him. But he never gave up on the idea of creating a “scent symphony.”

In 2009, the Guggenheim Museum in New York City presented his Green Aria: A ScentOpera, which told a story using smells and “wordless music.” Two dozen fragrances were pumped through adjustable “scent microphones” attached to each seat; the theme was “the struggle between man and nature.” Needless to say, this ScentStories for the art world yielded much more favorable reviews than the version sold at Walmart. New York Magazine lauded Green Aria as “groundbreaking.” New York Times music reviewer Anthony Tommasini took it a step further, calling the piece a “Gesamtkunstwerk, a unified work engaging every dimension of human perception.”

Like a great aroma, Scentstories remained beloved at Febreze in the years following its discontinuation. “I have one of them under my desk,” Diersing said. “It’s not a trophy, but it’s in my museum.” McGowan told me that Diersing made a Scentstory disc for his daughter when the American Girl doll “Kit” came out.

While there’s no debate over Scentstories’ commercial failure, McGowan doesn’t think it should be written off completely. “It paved the way for so many things moving forward,” he said. “Had we not done Scentstories, we might not have understood how consumers are using fragrances at home.

“Being a pioneer is hard, but it’s high risk, high reward.”

That’s why the Scentstories doesn’t fit in the Museum of Failure. Unlike a Delorean, the player wasn’t trying to replace candles or music players by “revolutionizing” the home scent industry. Unlike Coke II, it wasn’t despised by consumers. The Scentstories player was a prototype for something to come, and its ingenuity is worth celebrating.

As a kid, knowing that we live in a world where CD players can pump out smells like symphonies was exciting. It meant that big companies like Procter & Gamble would listen to wild ideas and try them out.

Innovation doesn’t always produce streamlined, rational objects that have immediate usability. Sometimes we get purple ketchup. And we should embrace that—or at least have a sense of humor about it. Because if AT&T thought its bizarre “picturephone” would be put in a Museum of Failure decades after it flopped at the 1964 World’s Fair, we wouldn’t have FaceTime today. The same goes for shoes with wheels aka “roller skates” and frozen milk, aka “ice cream,” other Gesamtkunstwerks.

Until the next Scentstories comes along, I’ll be over here on Track 2: “Wading Through Dystopian Pessimism.” It smells like persimmon and grass.