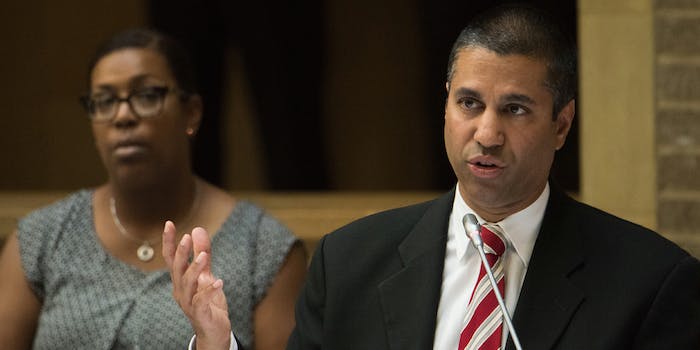 27 senators telling them to postpone it wasn't enough.

The Federal Communications Commission (FCC) will continue ahead with its plan to repeal net neutrality rules later this month, despite calls from 27 senators who worried that fake comments to the agency regarding net neutrality clouded their judgment.

FCC Chairman Ajit Pai‘s office told Ars Technica that the letter sent by the 27 senators, which said evidence suggests more than 1 million comments submitted by the public in favor of gutting the rules were fraudulently submitted, was an example that people in favor of net neutrality are becoming “desperate.”

“This is just evidence that supporters of heavy-handed Internet regulations are becoming more desperate by the day as their effort to defeat Chairman Pai’s plan to restore Internet freedom has stalled,” Pai’s office told the website. “The vote will proceed as scheduled on December 14.”

Net neutrality, a founding principle of the internet, ensures that all internet traffic is treated equally. Essentially it bars internet service providers (ISPs) from “slowing down” or blocking websites, such as Netflix, in favor of their own streaming services.

You can read more over at Ars Technica here.