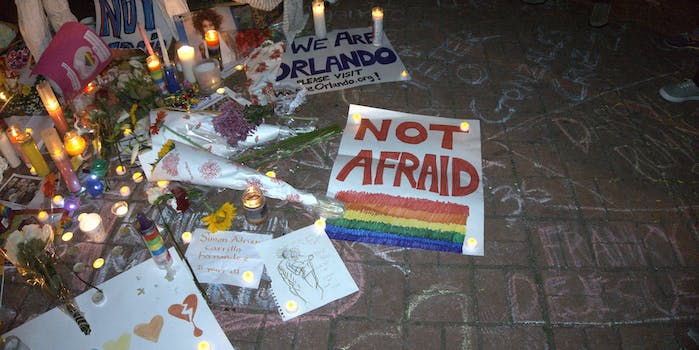 Audio from 911 calls will not be released out of respect for the victims, the FBI said.

Speaking with police negotiators shortly after midnight on June 12, terrorist Omar Mateen, in the midst of a shooting rampage that left 49 dead, threatened to detonate a van full of explosives if police didn’t keep their distance, a newly released police records reveal.

An additional 53 people were severely wounded inside the nightclub, a local LGBTQ landmark long considered a safe space for members of the gay community.

A partial transcript of Marteen’s exchange with law enforcement on the night of the Pulse nightclub shooting also shows he threatened to detonate an explosive device inside the club.

The transcript, released on Monday by the Federal Bureau of Investigation’s Tampa Field Office, shows that crisis negotiators engaged with Mateen on three occasions, the last of which occurred roughly an hour and a half after the initial 911 call.

The Orlando Police Department (OPD) was initially alerted to the shooting at 2:02am, and officers arrived at Pulse nightclub approximately two minutes later. At roughly 2:35am, Mateen contacted a 911 operator during a call that lasted approximately 50 seconds, according to the FBI timeline.

Occasionally speaking in Arabic, Mateen reportedly told a 911 dispatcher: “Praise be to God, and prayers as well as peace be upon the prophet of God.” He appears to ignore two requests from the dispatcher to reveal his identity.

While it has been widely reported that prior to the shooting Mateen, who was born in New York City, pledged allegiance to the Islamic State in a series of Facebook posts, the Department of Justice (DOJ) redacted all references to the terrorist organization from the transcripts released on Monday. Mateen’s name was also redacted.

U.S. Attorney General Loretta Lynch explained the redactions during an interview with NBC News on Sunday: “What we’re not going to do is further proclaim this man’s pledges of allegiance to terrorist groups, and further his propaganda,” she said. “We are not going to hear him make his assertions of allegiance [to the Islamic State].”

In addition to the 911-call content, the FBI published the following timeline of events from the night of June 12:

During conservations with Mateen—whom the FBI referred to on Monday solely as “the shooter”—he reiterated his allegiance to the Islamic State while demanding an end to U.S. military intervention in Syria and Iraq. Crisis negotiators were reportedly told: “There is some vehicle outside that has some bombs, just to let you know.”

“You people are going to get it and I’m gonna ignite if they try to do anything stupid,” Mateen said, threatening to detonate an explosive vest like the ones “used in France”—presumably a reference to the November 2015, Islamic State attacks in Paris that claimed the lives of 130 people.

In all, police spoke with Mateen by phone for nearly half an hour. An OPD SWAT team went forward with plans to storm the nightclub after subsequent attempts to reach the suspect by phone failed.

[4:21 a.m.]  OPD pulled an air conditioning unit out of a Pulse dressing room window for victims to evacuate.
[4:29 a.m.]  As victims were being rescued, they told OPD the shooter said he was going to put four vests with bombs on victims within 15 minutes.
[5:02 a.m.]  OPD SWAT and OCSO Hazardous Device Team began to breach wall with explosive charge and armored vehicle to make entry.
[5:14 a.m.]  OPD radio communication stated that shots were fired.
[5:15 a.m.] OPD radio communication stated that OPD engaged the suspect and the suspect was reported down.

Out of respect for the victims, the FBI said it had no plans to release audio from 911 calls made from inside the club.

Update 3:10pm CT, June 20: The DOJ and FBI on Monday decided to release the unredacted transcript of the terrorist’s 911 call after a public outcry over the decision to redact “caused an unnecessary distraction from the hard work that the FBI and our law enforcement partners have been doing to investigate this heinous crime,” according to joint statement emailed to the Daily Dot.

The full statement and transcript are below:

“The purpose of releasing the partial transcript of the shooter’s interaction with 911 operators was to provide transparency, while remaining sensitive to the interests of the surviving victims, their families, and the integrity of the ongoing investigation.  We also did not want to provide the killer or terrorist organizations with a publicity platform for hateful propaganda.  Unfortunately, the unreleased portions of the transcript that named the terrorist organizations and leaders have caused an unnecessary distraction from the hard work that the FBI and our law enforcement partners have been doing to investigate this heinous crime.  As much of this information had been previously reported, we have re-issued the complete transcript to include these references in order to provide the highest level of transparency possible under the circumstances.”

(OD)   Orlando Police Dispatcher
(OM)   Omar Mateen
OD: Emergency 911, this is being recorded.
OM: In the name of God the Merciful, the beneficent [Arabic]
OD: What?
OM: Praise be to God, and prayers as well as peace be upon the prophet of God [Arabic]. I wanna let you know, I’m in Orlando and I did the shootings.
OD: What’s your name?
OM: My name is I pledge of allegiance to Abu Bakr al-Baghdadi of the Islamic State.
OD: Ok, What’s your name?
OM: I pledge allegiance to Abu Bakr al-Baghdadi may God protect him [Arabic], on behalf of the Islamic State.
OD:  Alright, where are you at?
OM: In Orlando.
OD:  Where in Orlando?
[End of call.]