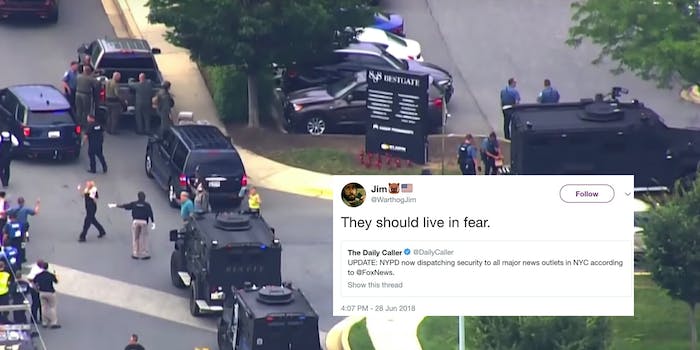 Redditors theorized that the shooting was staged.

In the wake of a fatal shooting Thursday at the Capital Gazette newsroom in Annapolis, Maryland, people associated with far-right groups on social media appeared to celebrate the deaths of journalists, while others theorized that the shooting was a leftist conspiracy. A suspect in the shooting, which left at least five people dead and others injured, is in custody.

Storyful intelligence analyst Michael Edison Hayden reported on social media posts that appeared to support the gunman’s actions. Twitter user @WarthogJim tweeted that journalists “should live in fear” while @TheSpectreOps (whose account has since been suspended) asked if it was “only journalists” who were hurt. A 4chan post suggested journalists were attacked for “telling lies.”

A Twitter spokesperson told the Daily Dot that no “specific” action outside of regular protocol is being taken to monitor tweets about the Annapolis shooting. Following a shooting at YouTube’s headquarters in April, Twitter issued a list of ways it evaluates content against its terms of service.

Comments on Reddit forum r/The_Donald included similarly hateful rhetoric, with some insinuating the journalists, their work, or their lack of firearms were to blame for the shooting.

Other comments on the Reddit forum propagated theories that Democrats staged the shooting.

One user said major media outlets were “trying to play the victim” by requesting police presence at newsrooms.