This fake Target coupon is tricking thousands on Facebook

Target has great Black Friday deals, but this is too good to be true.

Holiday shopping is here and money can be tight, but don’t be fooled by this scam that seems to have taken Facebook by storm.

A fake 50 percent off coupon for Target stores has been making the rounds on the social network, scooping up thousands of shares and leaving nothing but disappointment in its wake. The post appears as a genuine printable coupon for a whopping half off any store-wide purchase made before the end of the year, but the truth is much less exciting. 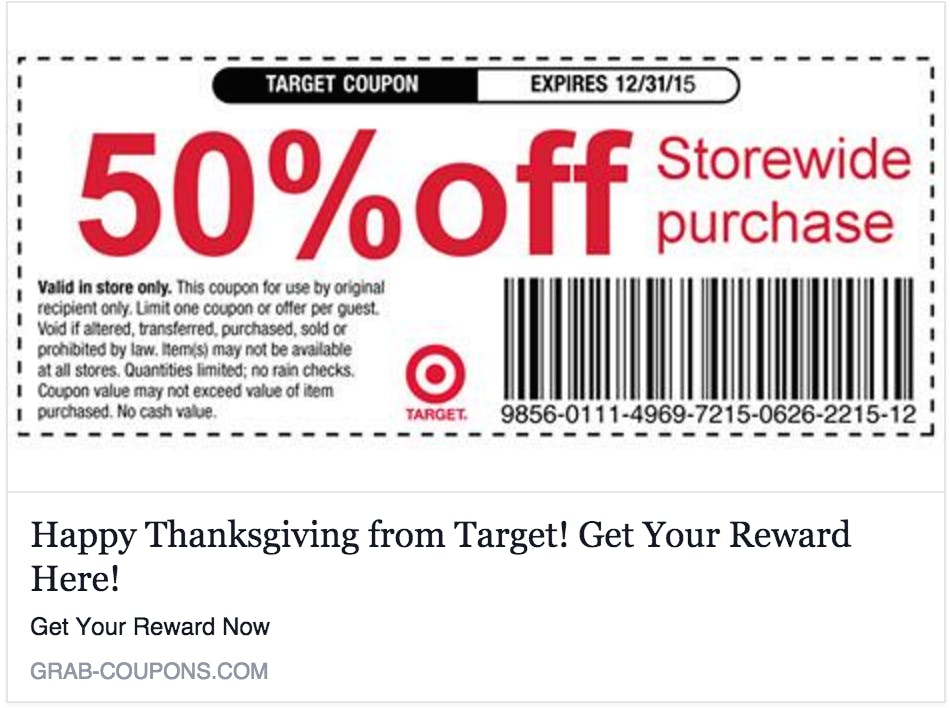 As spotted by Consumerist, actually venturing to the link (which we won’t link here for obvious reasons) leads to a short “to-do” list with fake Target branding. The page promises that the coupon resides just behind a short list of seemingly reasonable requirements, including liking a Facebook page and checking out a few promotional offers. Unfortunately it’s all a farce.

Actually clicking on the Facebook buttons reveals that they are actually fake, and lead to a whole web of pop-ups and advertising sites that demand paid subscriptions in order to have the chance at winning a $200 Target gift card. Given that the sites flaunt their illegal use of the Target logo to back their promotion suggests that the gift card itself, already far less enticing than 50 percent off a store visit, may not exist whatsoever.

In short, with all the Black Friday and Cyber Monday deals flying around, it might be easy to get tricked into something sketchy, so always read the fine print and use your common sense when browsing for bargains.