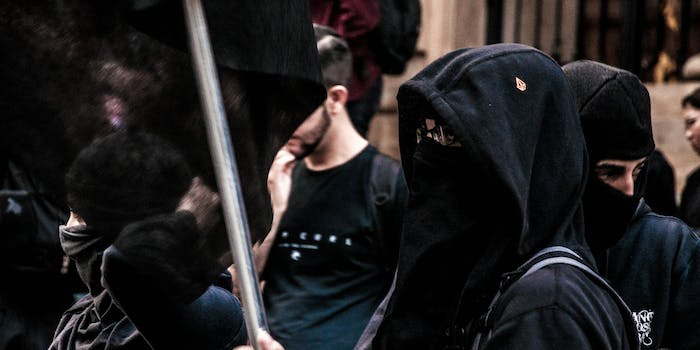 The Portland Antifa account was created by a member of a white supremacist Telegram channel.

The fake account appeared on Saturday to coincide with a rally by far-right groups in Portland, Oregon—where clashes with counter-protesters were anticipated and did happen—in an apparent bid to incite and heighten violence.

“See you in Portland, Fascist Proud Boys,” one fabricated tweet read, accompanied by a picture of gun-toting leftists. “This time we’re locked and loaded.”

The @ANTIFA_Portland account was quickly identified as fraudulent and the tweet was quickly flagged by researcher Erin Gallagher, whose investigative work focuses on social media network visualizations and studying disinformation.

Gwen Snyder, another writer who researches far-right groups, found the alleged creator of the account sharing screengrabs and taking credit for the tweet’s reach in a white supremacist channel on messaging app Telegram.

In case this "Portland ANTIFA" account comes across your feed, be aware that it's a troll account created by a nazi who has already taken credit for it in a popular white supremacist telegram channel. pic.twitter.com/5ayUAV5ARq

The account itself was soon suspended from Twitter, but not before its inflammatory disinformation was shared by popular right-wing internet personalities including meme artist Carpe Donktum, David Wohl, and on pro-Trump Reddit community r/The_Donald.

This now-suspended fake account was pushed as real by multiple people, including Curt Schilling (who has a history of pushing hoaxes), Carpe Donktum, David Wohl, & The Donald subreddit.https://t.co/ick5BTIF9E pic.twitter.com/OSXYf1Ghjr

The creation of fake Twitter accounts posing as anti-fascist activists or city chapters of antifa are nothing new. Researchers like Gallagher have been studying entire networks of fake accounts for a couple of years now.

“The purpose of the fake Portland antifa account was to media jam and spread disinformation about the right-wing rally and counter-protests in Portland,” Gallagher told the Daily Dot. “These fake antifa accounts have been around for 2+ years now and have a history of successfully trolling the media and tricking some people into believing they’re real. Others realize it’s a troll but still share their inflammatory content because they think it’s funny.”

In a 2017 investigation, Gallagher was able to isolate an active segment of an influential fake antifa network centered on the fraudulent @OfficialAntifa profile “which seem to be part of an escalating campaign to discredit anarchist news website It’s Going Down.”

She was able to demonstrate, through analysis and images, how the imposter accounts worked together to boost and amplify one another—as was the case with @ANTIFA_Portland.

I tracked the antifa hashtag throughout 2017 and every time it was *dominated* by the alt-right. Caroline was one of the few people who regularly appeared in those trends, pushing back on the false narratives that inevitably spread like wildfire. https://t.co/jrpqFxGYII

I suppose now that #AntifaTerrorists is trending, it may be a good time to remind you that the far-right has been spreading disinformation about antifa and manipulating antifa-related social media hashtags, search algorithms, etc, for years.

This weekend, however, the impact of such a smear campaign like the fake Portland Antifa account can have a significant impact, especially given President Donald Trump’s own remarks that he would be watching the events in Portland, Oregon, closely while weighing whether to designate antifa as an “organization of terror.”

Major consideration is being given to naming ANTIFA an “ORGANIZATION OF TERROR.” Portland is being watched very closely. Hopefully the Mayor will be able to properly do his job!

“The fake antifa troll,” Gallagher said to the Daily Dot, “was just another component in a larger network of right-wing social media influencers and MAGA amplifiers that pushes out content that frames antifascist activists in the worst possible light and portrays leftists as ultra-violent while downplaying or outright ignoring violence from right-wing extremists.”