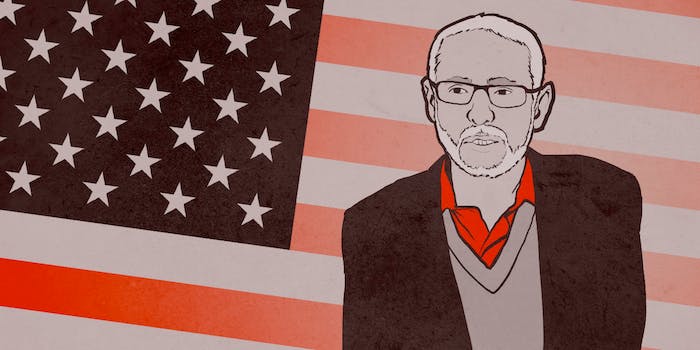 'We need to know the names.'

Almost a year to the day since President Barack Obama apologized for a U.S. drone strike in Pakistan that mistakenly killed two western Al Qaeda hostages—one American, the other Italian—a Yemeni man is doubling down on his nearly three-and-a-half-year effort to receive similar recognition.

On Thursday, Faisal bin Ali Jaber appealed a decision by a federal district court in Washington, D.C., to dismiss his 2015 lawsuit that aimed to determine whether the drone strikes that killed his family on Aug. 29, 2012, were unlawful. At the very least, Faisal had hoped it would shine a light on the U.S.’s secretive drone program and help explain why his brother-in-law Salem, an imam, and nephew Waleed, a police officer, were wrongfully killed, as he has reason to believe they were.

Years earlier, Faisal says, a Yemeni official had secretly handed him a plastic bag filled with $100,000 in cash and suggested that it was a condolence payment from the U.S. government. But Faisal wasn’t satisfied; the money was neither a public acknowledgement that the strike had occurred nor an apology. He’d have to keep looking for closure.

“If we got past the motion to dismiss phase [of the lawsuit],” says Joe Pace, Faisal’s attorney who works with the international human-rights group Reprieve, “we would have had an opportunity to demand that the government provide us with … any assessment that they might have done on the lawfulness of the strike.”

Since this attempt at seeking answers was at least temporarily thwarted, Faisal’s attorneys decided to explore another avenue: the Freedom of Information Act (FOIA). Faisal and Edward Pilkington of the Guardian filed multiple requests for any and all records pertaining to the strike, but four months later, they say they have yet to receive a substantive response. So on Wednesday afternoon, the duo filed a lawsuit against the Department of Defense, the Department of Justice, the Department of State, and the Department of Treasury to obtain those documents.

The road that led Faisal, an environmental engineer from Yemen, to file multiple lawsuits against a world power is a winding one. It started with a wedding.

In August 2012, Faisal says, he and his family, including Salem and Waleed, gathered in the village of Khashamir for an extended celebration of his eldest son’s marriage. Days before the wedding, Salem gave a sermon denouncing Al Qaeda’s religious justification for killing innocents. Though congregants expressed concerns that Salem’s sermons could make him a target for Al Qaeda, he insisted that it was his duty as an imam to counter their extremism.

The day after the wedding, three young men came looking for Salem. Family members tried to divert the strangers, to no avail: The youths found Salem and asked to speak with him. Waleed decided to accompany Salem for protection. And as the men spoke, villagers watched the exchange. That’s when four hellfire missiles killed all five of them.

Faisal believes the three still-unidentified men were the target of the attack, but this hasn’t been confirmed. His lawyers say that the U.S. has yet to acknowledge the strike happened at all.

Ned Price, the chief spokesman of the White House’s National Security Council, declined to comment on Faisal’s case specifically. He did say, however, that “the United States goes to extraordinary lengths to avoid non-combatant casualties in lethal operations, providing protections as a matter of policy that go beyond those required by the law of armed conflict.

“Unlike our enemies which deliberately and pointedly violate the law of armed conflict,” he continues, “the United States takes great care to adhere to the fundamental law of armed conflict principle of distinction, which requires that attacks be directed only against military objectives and that civilians and civilian objects not be the target of attack.”

In the years following 9/11, a number of Al Qaeda operatives went to Yemen and eventually formed Al Qaeda in the Arabian Peninsula (AQAP). The U.S. responded by making the country a key location for intelligence gathering and a target for drone strikes. In March, the Bureau for Investigative Journalism reported that there have been 128 U.S. air strikes in Yemen, including those carried out by drone, since Obama took office in 2009. According to their calculations, at least 714 people have been killed, 133 of whom were reported to be civilians.

Faisal recently attended the exhibition at New York City’s Whitney museum by Laura Poitras—the Oscar-winning documentary filmmaker and producer to whom Edward Snowden first divulged his trove of National Security Agency secrets—that explores post-9/11 surveillance and counterterrorism tactics. The exhibit allows visitor to see the wreckage of the post-wedding bombing in a video of the strike’s aftermath.

“The bodies weren’t bodies, they were just burned,” Faisal recalls via a translator on Sunday evening at the final event associated with the exhibition before it closes on May 1. “I felt like I was going to faint. I felt like I was watching something that came out of a horror movie.” He’s been on a mission to get justice ever since.

In November 2013, Faisal visited Washington, D.C., where he was able to meet a series of U.S. officials, including two staffers from the White House’s National Security Council—a group high up on the chain of command for approving a target. People he met expressed private sympathies, Faisal’s lawyers say, and mentioned the general existence of condolence payments. “We were hoping that they would give him some answers, but of course they didn’t,” says Pace. “He got nothing.”

Soon after Faisal returned home, he says, a member of Yemen’s security services requested a meeting. That’s when Faisal claims that he was handed the bag full of cash. The Yemeni official verbally confirmed the money came from the U.S., Faisal says, but the man wouldn’t write that down.

“I thought that form of compensation would be made public,” says Faisal. “Terrorists recruit by pointing to the fact drones kill people, and that’s how they get the youth. Compensation made public would then counteract that kind of recruitment.” The family decided to hold the money in trust as evidence until they received an apology.

“We take seriously all credible reports of non-combatant deaths and injuries,” Price says. “[W]ere non-combatants killed or injured in a U.S. strike, condolence or other ex gratia payments, such as solatia, may be available.”

Faisal’s family first tried to sue the German government for hosting the U.S. military base in Ramstein. The base houses a satellite relay station for drone flight control data, allowing drone operators sitting in bunkers in the American Southeast to control drones in countries like Yemen and Pakistan. The case was rejected in May 2015.

The next month, Faisal filed his first lawsuit against the U.S. government. As he waited for movement, he asked his legal representation at Reprieve to write a letter to President Obama. In the September letter, Faisal offered to settle the case in exchange for “an apology and some explanation for the strike that mistakenly killed his two relatives,” much like the apology the president gave the families of Warren Weinstein and Giovanni Lo Porto — the American and Italian killed by a U.S. drone strike. The Justice Department declined the offer.

“It’s telling,” says Pace, Faisal’s attorney, “the only time [Obama] apologizes for a drone strike is when it kills white people.”

Instead, the Justice Department argued to the judge, as it has in other cases seeking redress for drone strikes, that it can neither confirm nor deny that the strike occurred. “The Executive makes such decisions after, among other things, weighing sensitive intelligence information and diplomatic considerations,” Justice Department attorneys wrote in a filing to the court, “far afield from the judiciary’s area of expertise.” The judge ultimately agreed and dismissed the case on February 22.

So far, legal remedies have proven fruitless along Faisal’s long path to justice. But on April 12, Reprieve wrote yet another letter to President Obama, warning him that Faisal now holds a U.S. Visa, would soon be in the U.S. and would be available to meet. The reason for Faisal’s visit was to participate in a more non-traditional means of conveying to Americans what the U.S. drone war looks like: art.

Faisal walked through Poitras’s exhibition in New York on Sunday morning alongside unknowing museum-goers. The exhibition has a prominent section dedicated to the U.S.’s covert drone war in which attendees lay on their backs and watch as the ceiling morphs into skies in Yemen, Pakistan, and Somalia—places accustomed to unmanned, targeted killings. Faisal laid down to watch a familiar sky. And as American children played and giggled around him, he reflected on how his relationship with this very sky had changed.

“Part of the culture used to be laying on the roofs in Yemen and looking up at the sky,” says Faisal. “But after the drones program began, the sky was not longer something beautiful that we could enjoy, it was something you are kind of afraid of.”

“The children in Yemen,” he says, “they don’t laugh to the sky,”

Faisal revisited this very transition from getting lost in the sky’s wonder to realizing that it’s a conduit for annihilation later in the day, during the last of a series of events affiliated with the exhibit. Noted poet, essayist, and translator Anne Carson read a lengthy work titled Lecture on the History of Skywriting in which, from its own perspective, the sky explains its history as a writer. Like the Bible, the steps of the sky’s literary chronology came in the form of days of the week. For much of the week, Carson playfully explored the contours of the sky’s mind.

“There’s a beauty to it being shown in the U.S. When art comes into the story, it gives it different dimensions.”

But by “Saturday,” the whimsical period came to an abrupt end. Faisal, who was sitting off to the side in complete darkness, turned on a light and recited the next portion in Arabic. For a minute he was alone in a private world, as much of the audience couldn’t understand what he was saying. But Carson seemed to echo in English.

“I don’t expect all of you creeping creatures that creep upon the earth to stop wanting warfare anytime soon,” she said. “And I didn’t, I don’t expect me to stop delivering the hysterical valentines of your desire through my beautiful blue air. That’s who we are. Saturday was the day to acknowledge this.”

Despite the heartbreaking reminder about his sky, and the painful rewatching of his drone strike footage, Faisal found solace in the experience. “There’s a beauty to it being shown in the U.S.,” he says. “When art comes into the story, it gives it different dimensions.” But Faisal is still looking for his answers.

Last month, the White House announced that it would publicly release “an assessment of combatant and noncombatant casualties” resulting from drone strikes that have occurred “outside areas of active hostilities” since Obama took office.

“We don’t know what kind of numbers are going to be released,” says Pace, noting that any military-aged man is often deemed a militant. But whatever the numbers are, he’s confident they’ll be “woefully insufficient.”

“We need to know the names,” he says.