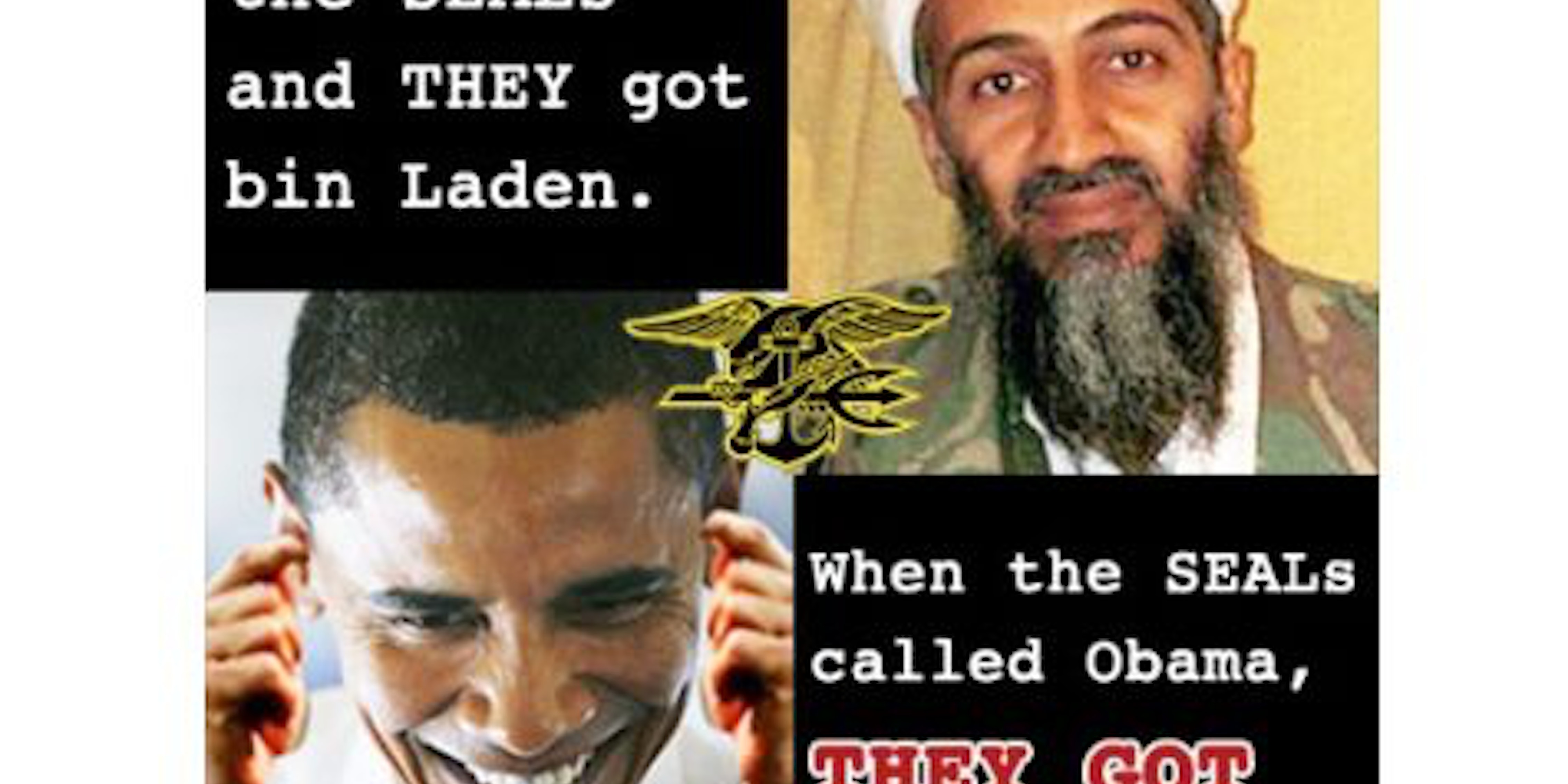 The post in question was shared roughly 30,000 times before it was taken down violating the social network's terms of service.

Facebook has apologized to a political action committee (PAC) for deleting an image from its platform that depicted President Barack Obama in a negative light.

On Saturday, Special Operations Speaks (SOS), a PAC started by former Navy SEAL veteran Larry Bailey, posted an image on its Facebook page that showed President Obama and Osama Bin Laden, along with the text “Obama called the SEALS and they got bin Laden. When the SEALS called OBAMA, THEY GOT DENIED.”

The statement expressed in the image was inspired by a Fox News report that the CIA operatives in Benghazi were denied help. For context, Bailey—a self-identifying birther—was also responsible for Vietnam Vets for the Truth, a PAC that notoriously spread misinformation about then-Democratic candidate John Kerry during the 2004 presidential election.

The post—which stretches the truth, to say the least—was widely shared (roughly 30,000 times) before it was taken down by the social network because it violated its Statement of Rights and Responsibilities.

Breitbart picked up the story on Tuesday and accused Facebook of purposefully taking down the page in order to protect Obama from criticism, without providing anything that remotely resembled facts.

SOS proceeded to repost the image again, along with the short comment it got from Facebook. Once again, the social network took down the image and froze SOS’s page for 24 hours.

A member of our team accidentally removed something you posted on Facebook. This was mistake, and we sincerely apologize for this error. We’ve since restored the content, and you should now be able to see it.

SOS and at least one pundit—Erik Wemple of the Washington Post—are strongly hinting that the deletion was more than just a simple error and that it was, in fact, politically motivated.

No one, however, is mentioning that the post did violate Facebook’s terms of service. The last item under the category “Protecting Other People’s Rights” clearly prohibits individuals from tagging users without their consent. SOS broke that rule when it tagged President Obama on the post.

Secondly, Facebook has been fairly transparent about what happens to a post when it’s reported, as highlighted by this post published in June 2012. Given that countless of content gets flagged on a daily basis, it is not out of the realm of possibility that a mistake will occur on occasion.

But going off of that makes for a less interesting story, especially if you’re a right-wing group purposefully trying to publicly besmirch Obama.

The fact that Facebook isn’t saying much also grants the anti-GOP conspiracy unwarranted credence. The Daily Dot reached out to the company’s Public Policy Communications Manager Andrew Noyes for a statement. He replied: “This was an error and we apologize for any inconvenience it may have caused.”