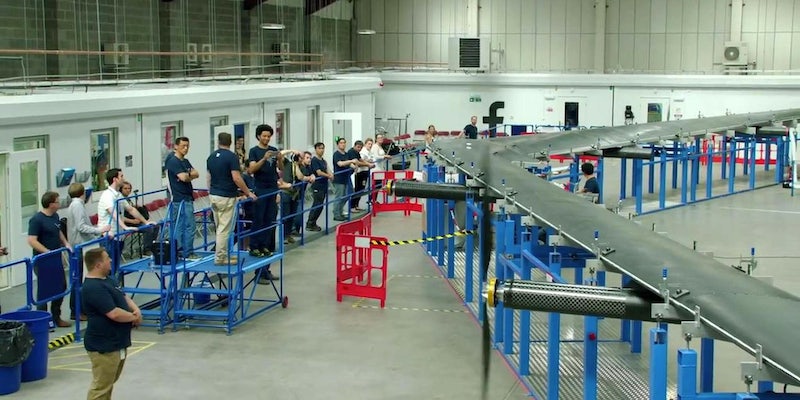 Facebook is launching unmanned planes that beam the Internet through lasers

This is probably how Skynet starts.

Facebook‘s plan to provide Internet from the skies—and fuel our worst conspiratorial fears about its thirst for power—moved one step closer to reality thanks to new breakthroughs announced by the social network’s Connectivity Lab on Thursday.

Aquila is Facebook’s solar-powered, unmanned aircraft designed to beam down Internet to the developing world from 90,000 feet in the sky. The craft, designed by the company’s aerospace team based in the United Kingdom, is now operational and ready for testing. Only time will tell if this development will be marked as the beginning of the fully connected globe or as the day The Terminator franchise became a documentary series.

The sky-bound Internet providers will communicate with stations on the ground via lasers. The process is an extremely precise one, connecting a grounded laser to a dome-shaped optical head on the bottom on the moving plane. It requires the accuracy of hitting a target the size of a dime from 10 miles away.

Once contact is made with the laser, Facebook can shoot data at at tens of gigabytes per second. Speeds will be slower during rainy or overcast days, but because the Aquila planes communicate with one another via lasers as well, Facebook will be able to provide a blanket of coverage from above.

(Should you fear the fact that Facebook is literally shooting lasers from the sky? Probably. Lasers, historically, are used for nefarious purposes. Do you think James Bond would have been so eager to escape from the laser beam in Goldfinger if he thought it was just going to pierce him with a couple gigs of cat GIFs?)

The full-scale version of the plane has the wingspan of more than 137 feet (about 42 meters), which is comparable to a Boeing 737 jet. To make the aircraft lightweight, the team designed a carbon-fiber frame that weighs under 1,000 pounds.

Carbon fiber is about three times as strong as standard steel but maintains the aerodynamic build required to keep the plane in the air for long periods of time. Facebook’s flying Internet machines will remain in the air for three months at a time.

Aquila will soar well above commercial planes and potential weather interferences. During the night, it will slope down to an altitude of 60,000 feet to conserve energy.

Once the project is up and running—which is still a ways off, so you have time to stock your basement full of canned goods—full fleets of Aquila aircraft will be responsible for providing Web access to billions who are without it.