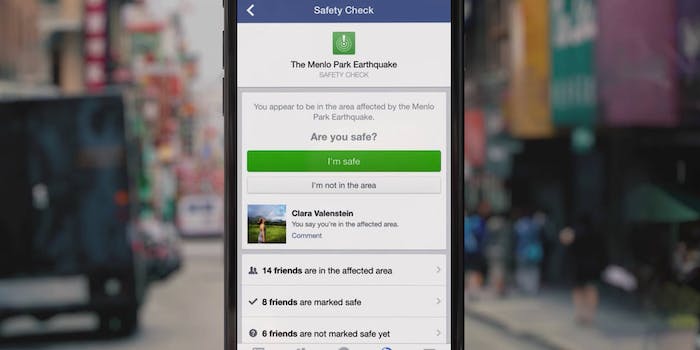 Facebook helps users check in to alert friends and family they are safe.

Facebook has activated its Safety Check feature—which allows users to notify others of their safety—following an apparent terrorist attack in Nice, France in which a truck plowed through a large crowd and killed dozens of people during a Bastille Day celebration.

The incident took place around 10pm local time in Nice, when a large white truck was driven through a crowd that had gathered to watch fireworks on popular beach, Promenade des Anglais. As many as 73 are believed to be dead following the event.

Facebook’s Safety Check, which was first introduced in 2014, gives users who are located near the event the ability to confirm their safety for friends and family.

Facebook uses a user’s location and proximity to a disaster by looking at the city listed in their profile, their last location if they have opted in to the Nearby Friends feature, and the city where they are using the internet. Safety Check sends a notification to users in affected areas and asks them to confirm their status by tapping an “I’m safe” button, which generates a post to their news feed so others are made aware.

Facebook has previously activated the Safety Check feature following the terrorist attacks in Paris that left 130 dead in November, as well as in the aftermath of a mass shooting that took place at a gay nightclub in Orlando and bombings at an airport in Turkey last month.

According to NBC News, French governmental agencies have encouraged people with Facebook accounts in the Nice area to check in using Safety Check.

French governmental agencies urging people in Nice area to check in using Facebook's "Safety Check" feature, if they use the platform.

While Twitter doesn’t offer a similar feature to Safety Check, users of the platform have been communicating with one another using the hashtag #PortesOuvertesNice (“doors open Nice”) to offer safe havens for people to take cover.