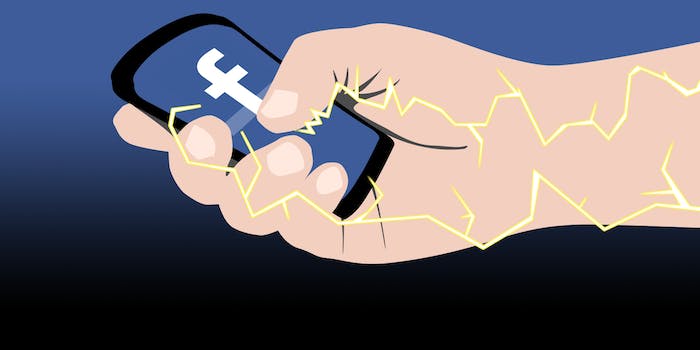 Pavlov Poke is trying to zap that Facebook habit.

If you were electrocuted every time you logged on to Facebook, would you use it less? That’s what two students at MIT are attempting to find out.

Robert R. Morris and Dan McDuff are Ph.D. candidates at MIT, and have developed a device called Pavlov Poke, which references Ivan Pavlov’s conditioning experiments with dogs and Facebook’s maligned “poke” feature. According to McDuff, the shock is “unpleasant but it’s not dangerous.”

Pavlov Poke monitors online activity, and if Facebook is accessed, it sends a signal to an Arduino board, connected via USB to a computer, which then sends a shock via keypad, which the user’s hand is resting on. The two men are still gauging the effectiveness of the Poke. The instructional video for the device illustrates that this is supposed to be a bit of a joke.

Still, there is a very real cognitive dissonance that comes with using Facebook. So many users loathe themselves for logging on, or keep saying they’re ready to delete their accounts, or know they’re not gaining any real knowledge by scrolling through status updates—and yet they keep logging on, out of habit. A new study shows Facebook is not doing wonders for our self-esteem. On his website, Morris explains why we need to cut back on our online addictions.

“All too often, people assume they use a given technology because they want to and because it is in their best self-interest. Unfortunately, this assumption does not align with how these technologies are designed. Sites like Facebook are crafted on the basis of something called engagement metrics, which measure the number of daily active users, the time people spend on the site, etc. Unfortunately, these metrics are not designed to assess well-being. A product can have incredibly high engagement metrics, and yet be extremely bad for its users (cigarettes, for example).”

If electroshock therapy is too heavy for you, McDuff and Morris have also developed a phone version of the Poke. It’s a help line of sorts, in which users can call and get yelled at for logging on to Facebook.