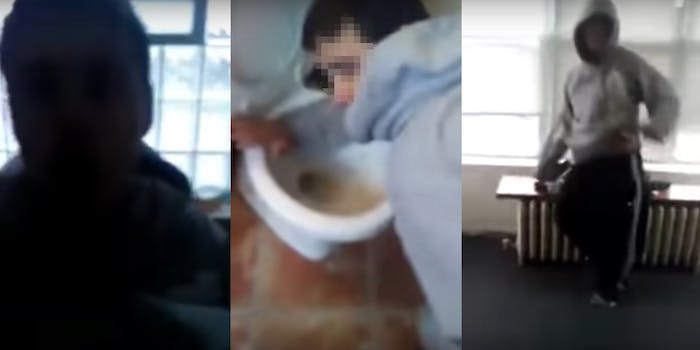 The perpetrators yelled 'f**k Trump' while carrying out the apparent attack.

This article contains video that depicts disturbing acts of violence.

Chicago police have detained four individuals for the apparent torture of an 18-year-old man with reported mental disabilities. The perpetrators streamed the incident on Facebook Live.

Videos of the disturbing incident posted online show the perpetrators physically abusing the victim, including cutting his hair with a knife, causing his scalp to bleed, and forcing him to drink toilet water.

No individuals had been charged as of Wednesday night, a Chicago Police Department spokesman told the Daily Dot. However, police filed hate-crime and kidnapping charges against four individuals on Thursday.

Police told the local CBS News affiliate that the victim lives in a Chicago suburb. Chicago’s Fox affiliate reported that the victim was transported from his hometown to Chicago, where he was allegedly tortured in an apartment on the city’s West Side. The victim allegedly knew at least one of the perpetrators.

“It’s sickening,” Chicago Police Supt. Eddie Johnson said during a press conference on Wednesday. “It makes you wonder what would make individuals treat somebody like that. I’ve been a cop for 28 years, and I’ve seen things that you shouldn’t see in a lifetime, but it still amazes me how you still see things that you just shouldn’t. I’m not going to say it shocked me, but it was sickening.”

Chicago PD refused to confirm to the Daily Dot the genders of the individuals questioned by police, but investigators have reportedly interviewed two adult males and two adult females in connection to the alleged attack.

The victim was treated at a hospital and is with his parents, CBS Chicago reports. Authorities are, according to Fox 32, expected to bring charges against individuals involved in the incident.