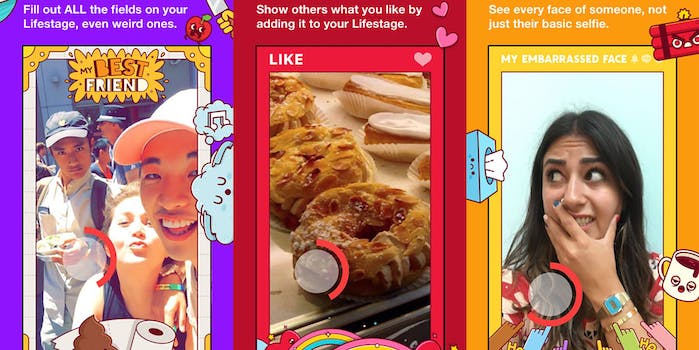 The app made for teens by a teen shares everything publicly—and there's nothing you can do about it.

Looking to get in on the developing photo-sharing app wars, Facebook has thrown its hat into the ring. Sure, the company may own Instagram, which just released new features that mimic that of Snapchat. However, the social media behemoth is looking to conquer the market and corner its most active users—teens.

That’s why it unveiled Lifestage on Friday. Created by 19-year-old Michael Sayman, the app took two years to develop. Sayman was previously an intern for Facebook and his 4Snaps app had previously gotten the attention of head honcho Mark Zuckerberg. Needless to say, the company was impressed enough to hand him the reigns on this mobile venture.

What does Lifestage do, exactly? According to its description, “Lifestage makes it easy and fun to share a visual profile of who you are with your school network.” And by social network, the company means high school or undergrad—and is quick to drive that point home. It’s unclear if Lifestage will expand its parameters. According to Digital Trends, anyone over 21 is barred from viewing anything but their own profile.

After downloading Lifestage, I entered my age and phone number and waited for a verification code that would never send. This may be for the best considering its less than stellar reception since hitting the app store.

Discretion may not be the biggest concern to teens but after taking a spin with Lifestage, they’ll surely come away from it more cognizant of what they share. An explicit disclaimer states that there’s no such thing as privacy on this app. Regardless of which school a user attends, anyone on Lifestage is able to view content from anyone else. It’s unclear if additional privacy settings will be rolled out in updates to come. Support is, however, not completely lost on the app. Lifestage does boast block and report features, reportedly easily accessible through the swipe of a finger.

According to CNet, the app is pretty barebones right now. Journalist Ian Sherr was able to get in and attempt to use it, to frustrating results. There’s apparently no help page and some of the photo prompts are seriously sad, such as one that asks you essentially what it looks like when you’re broke.

Lifestage is currently available for iOS with no word on when it will hit Android devices.