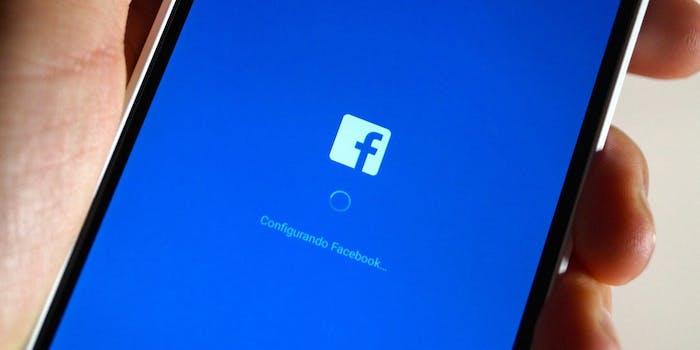 Facebook is working on a fix for the problem.

Checking Facebook excessively is a good way to kill your battery but according to a wave of user reports, the Facebook app might be draining your iPhone’s power whether you’re using it or not.

For the past several days, the web has become awash with users complaining about Facebook’s iOS app using an abnormal amount of battery power and data while running in the background. On Thursday, Facebook confirmed the problem.

“We have heard reports of some people experiencing battery issues with our iOS app. We’re looking into this and hope to have a fix in place soon,” a Facebook spokesperson told The Daily Dot.

Earlier this week, Circa co-founder Matt Galligan noted the Facebook app was remaining on and running in the background on iOS—even when the user turned off the Background App Refresh option for the social network.

Drilling down into the usage with iOS 9’s energy consumption stats reveals that the drain seems to be some sort of audio feature from the Facebook app that continues to run long after the app has been closed. What exactly that audio is remains unclear.

Reports of the odd behavior and excessive amounts of consumption by the app have been floating around for awhile. A Reddit thread dating back two months lodges a complaint about audio from the Facebook app. The poster notes it accounts for a ludicrous 91 percent of battery usage in a 24 hour period.

Similar observations have been pointed out on Apple’s support community as well as on Twitter.

Anyone know why Facebook hijacks audio sessions on iOS?

So if you have background updates enabled, FB will leverage iOS to update intelligently. If not, it uses “Audio” to update anyway.

There are a variety of theories as to why the Facebook app is tapping into audio to stay active, but none of the proposed fixes or workarounds for those suggestions have born out better results thus far.

While Facebook works to fix the problem (or, if you’re cynical, works to hide it better), the best bet is to access Facebook through your mobile web browser rather than the app, or through the oft-forgotten and under-appreciated Paper app.