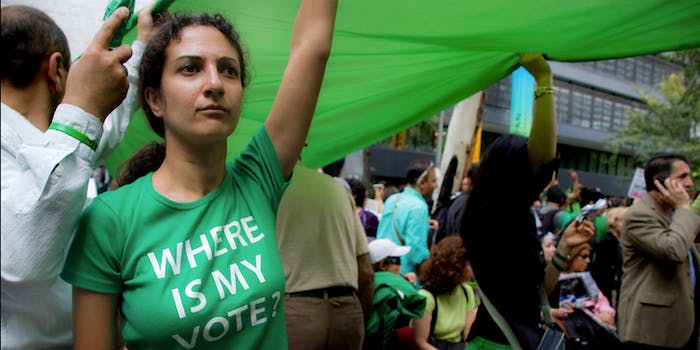 Unlock Iran puts faces to the names of more than 800 political prisoners.

Iran currently jails more than 800 people who tried to exert their basic rights within the Islamic republic. Now activists want you to get to know these 800 individuals personally.

The campaign is attempting to put a human face on the Iranian government’s denial of basic human rights. Using a layout similar in style to Facebook’s timeline, Unlock Iran tells the stories of ten “archetypes”— individual prisoners who embody a larger group of jailed political dissidents.

For instance one page tells the story of “the journalist.” In this case, it’s Mohammad Kaboudvand, a 51 year old Kurdish reporter, editor, and activist. For years, Kaboudvand was harassed and detained by the government for his reporting. In 2003, Kaboudvand launched a weekly magazine called Payam-e Mardom (People’s Message). Though the periodical was approved by Iran’s Ministry of Culture and Islamic Guidance, it was shut down after just 13 issues and banned. He was arrested and briefly detained at that time. Later, Kaboudvand went on to start the Kurdistan Human Rights Organization. His involvement in the group led to his arrest and he is now serving an 11 year jail sentence. Despite suffering severe health problems while in prison, Kaboudvand has staged several hunger strikes in protest.

His story is presented as representation of the 21 journalist presently jailed within the country. Likewise, there are stories to encapsulate the experiences of some 85 jailed political activists, 27 students, 245 religious minorities, 32 bloggers, 20 technologist, 58 feminists, 372 ethnic minorities, 21 human rights defenders, and 19 labor activists.

“The very things we celebrate people for (exercise of intellectual, political, religious and artistic freedom of expression and association) have jailed lawyers, artists, scientists, and other prominent citizens in Iran,” Unlock Iran notes.

The IHRDC says Unlock Iran is designed to take advantage of “new leadership” and “new international engagement” to push for change within the country.

Geopolitical experts say Iran is at a crossroads. The election of President Hassan Rouhani to replace former fundamentalist hardliner Mahmoud Ahmadinejad was seen as a victory for reformers. Rouhani made some relatively progressive moves when he first took office, like acknowledging and condemning the Holocaust and reestablishing formal communications with the United States. But now, eight months into his presidency, the L.A. Times reports that Rouhani has done little to make good on promises to “bolster personal liberties or free political prisoners.”

However, Iran is continuing to reach out to the rest of the world after years of icreased isolationism under Ahmadinejad. The country is set to begin a new round of talks about their nuclear program and international sanctions. With Unlock Iran, the IHRDC hopes to engage an international audience and make sure human rights are part of the negotiations.

“In terms of human rights initiatives, 40,000 in two months is a huge number for us so we were really excited by the reception,” she said.