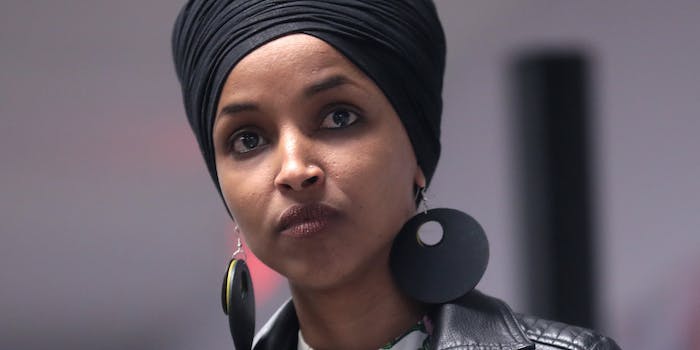 The lawmaker's aides say the ad 'peddles both hate speech and misinformation.'

Facebook is refusing to remove an advertisement that accuses Rep. Ilhan Omar (D-Minn.) of supporting Hamas despite pushback from the lawmaker’s office.

The ad, produced by the pro-Israel lobbying group AIPAC, shows Omar’s face on a Hamas rocket next to the phrase: “When Israel targets Hamas, Rep. Omar calls it an act of terrorism.”

Aides for Omar say the ad is a mischaracterization of a tweet made by the politician last week in which she highlighted civilian casualties in Palestine.

“Israeli air strikes killing civilians in Gaza is an act of terrorism. Palestinians deserve protection,” she tweeted. “Unlike Israel, missile defense programs, such as Iron Dome, don’t exist to protect Palestinian civilians. It’s unconscionable to not condemn these attacks on the week of Eid.”

Omar’s aides say the lawmaker has begun to receive death threats as a result of the ad. In an email to Facebook, Omar’s aides specifically stated that the ad “peddles both hate speech and misinformation,” according to the Washington Post.

Facebook spokesman Andy Stone later confirmed to the Post that the platform did not remove the ad after a review determined that it did not violate its policies. Stoned added that ads can be removed if they fail to pass a fact-checking analysis, which the clip is eligible for.

Omar’s aides expressed shock in its communications with the social media site, stating that they were “deeply concerned that Facebook would continue to profit off this hate.”

Multiple Democrats, including Sen. Nancy Pelosi (D-Calif.), have criticized the platform over its decision.

In response to the controversy, AIPAC has defended its ad as “fair and accurate.”

“The ad concerning Representative Omar is completely fair and accurate,” AIPAC spokesman Marshall Wittmann said. “It is not a personal attack but highlights her outrageous characterization of Israel’s efforts at self-defense as ‘terrorism.’ Israel targets Hamas terrorists, not civilians.”