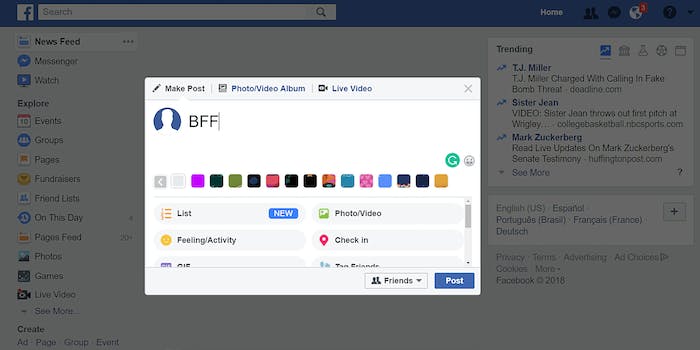 Viral Facebook hoax falsely tells users they ‘will be hacked’

Typing 'BFF' will tell you nothing about account security.

Facebook is still giving its users trust issues, and a recent hoax regarding the network’s CEO Mark Zuckerberg makes it easy to see why.

The fake post claims Zuckerberg “invented the word BFF” and that for users to make sure their Facebook accounts are safe from hacking, they should type “BFF” in the comments section and see if their comment appears green. Users whose comments didn’t turn green were misinformed they should change their password “immediately” or their accounts “will be hacked.”

According to BuzzFeed, one version of the post was shared more than 76,000 times and received almost 87,000 comments.

We know for sure that Zuckerberg did not invent the acronym “best friend forever,” but the post most likely struck fear in users due to Facebook’s recent privacy breaches and the company’s new algorithm for its News Feed.

The reimagined News Feed means friends should be seeing “fewer cooking videos from brands and publications” and more posts from friends and family, people who share meaningful relationships with the user, the New York Times reports. Apparently, the use of “BFF” plays on that algorithm change and feeds the hoax.

The reason some users’ comments turned green is a new Facebook feature called Text Delight that “sometimes” changes the color of the text when “BFF” is used in a comment, BuzzFeed reports. The same happens for words such as “congratulations” or “xoxo.”

Despite user fears, the color change has “nothing to do with an account’s privacy or security status,” according to BuzzFeed.

The hoax has spread to users in different countries and further incited confusion because “there may be differences based on your country or language settings,” Mashable reported.

The post may be fake—but the overall security concern is very real.