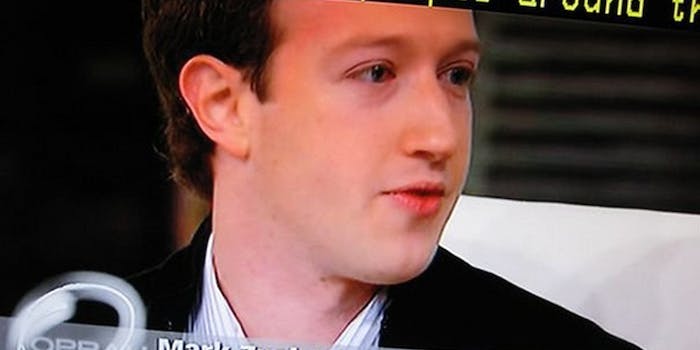 Facebook updates its policies on handing over your data to cops and courts—on the eve of Thanksgiving.

Facebook released guidelines on how it handles requests for member information from law enforcement agencies, lawyers and other legal entities on Wednesday evening, just before the American Thanksgiving holiday.

“We work with law enforcement where appropriate and to the extent required by law to ensure the safety of the people who use Facebook,” the guidelines state. “We may disclose information pursuant to subpoenas, court orders, or other requests (including criminal and civil matters) if we have a good faith belief that the response is required by law.”

The update was made to the section of its Help Center on “How does Facebook work with law enforcement.”

A spokesperson for Facebook could not be reached for comment Wednesday evening. The timing seems notable, since people who might normally hear about the news and raise concerns are traveling or visiting families.

Last year, Facebook CEO Mark Zuckerberg (shown above) said in an interview that the company was shifting away from its roots emphasizing user privacy. He wasn’t kidding.

The changes and their public posting come after last Friday’s release of guidelines that had been previously kept private by the 800-million-member social network. Those guidelines, dated 2006 and 2010, were part of 38,000 law enforcement emails published by hackers claiming to represent Anonymous’s AntiSec movement.

The new guidelines maintain strict policies about disclosing information in civil lawsuits. But the new rules seem to loosen the language about when information will be released to law enforcement agencies investigating criminal matters.

The new guidelines also contain a link to a form where lawyers and police officers can make requests for information. The form warns that it “is meant for usage by officials only.”

Also not readily apparent on the Help Center page were guidelines included in the 2010 document that discouraged law enforcement officers from creating phony user profiles for undercover investigations.

The publicly available version of the guidelines also offers less specific information about the types of information that can be released, saying only that Facebook will release information “if we have a good faith belief that the response is required by law” and “may also share information when we have a good-faith belief it is necessary to prevent fraud or other illegal activity, to prevent imminent bodily harm, or to protect ourselves and you from people violating our Statement of Rights and Responsibilities.”

The publication of the 2006 and 2010 documents by Public Intelligence was originally noted by Reuters, which said Facebook declined to verify if the documents had been generated by the company. Earlier on Wednesday, Talking Points Memo published an analysis comparing the 2006 and 2010 documents. The political blog said that a source “close to Facebook” had confirmed the new guidelines would be put on the Help Center later on Wednesday.

Public Intelligence has published six versions of the guidelines dating back to 2006. Together, they show how Facebook’s policy for subpoenas has evolved. The new guidelines also come at a time when federal judges are increasingly issuing search warrants for the contents of individuals’ Facebook accounts, according to Reuters.