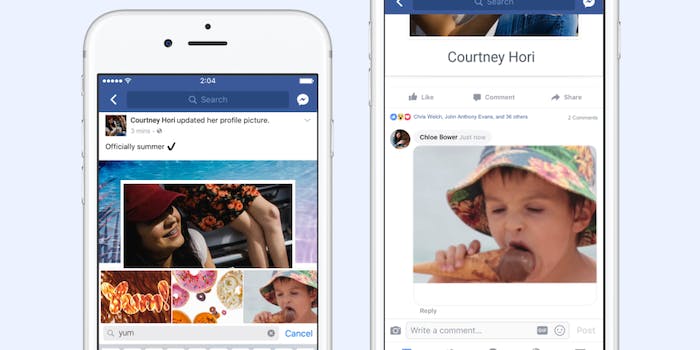 Facebook now has a dedicated GIF button, for all your GIF reaction needs.

Facebook is finally making its platform GIF-friendly. After introducing the ability to link to GIFs back in 2015, now the company is introducing a dedicated GIF button for all of its users.

Can we just say:

Now, when you’re typing out a comment to a friend’s post, you’ll see a GIF button next to the emoji button. Click that, then tap out the type of GIF you’re looking for (for example, “happy dance”). Then you can insert your GIF of choice directly as a comment to the post. Facebook started testing out this tool a few months ago, but now it’s available to everyone. You can check this out in action below.

The move comes as Facebook celebrates the GIF’s 30th anniversary. Along with adding this dedicated GIF button to Facebook, the company also released some interesting GIF-related stats. For example, people on Facebook Messenger have sent more than 13 billion GIFs over the last year. That translates to 25,000 GIFs per minute. New Year’s Day was the most popular day to send a GIF: Users shared more than 400 million on Messenger that day.

Facebook also worked with Giphy to create a handful of brand new GIFs featuring such internet stars as Patrick Starr, Violet Benson, and DREEZY. You can check those out at giphy.com/Facebook, or by searching #GIFparty on GIPHY.

And, of course, a celebration of the GIF would be incomplete without a debate over how it’s pronounced. So over the coming days, you may see a poll crop up at the top of your feed asking you to weigh in on whether it’s a hard G or soft G. Be sure to vote hard G, because soft G believers are wrong.