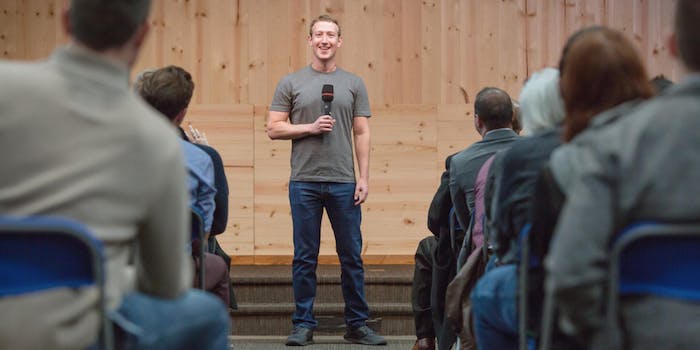 Last night at Facebook HQ, CEO Mark Zuckerberg gave a public Q&A, similar to the one he held back in November. The evening was full of praises for Zuckerberg and his company, and lots of fluff questions were thrown the CEO’s way. But one brave soul dared ask Zuck what the Internet at large has been asking for years:

Where is the Dislike button?

According to Zuckerberg, Facebook is considering adding it. “We’re thinking about it,” he said. “The Like button is really valuable because it’s a way for you to very quickly express positive emotion or sentiment when someone puts themselves out there and shares something.

“…[But] there are more sentiments that people want to express than just positivity or that they like something.” Zuckerberg related to the Like button problem plaguing us all: Sometimes it’s just not appropriate. “A lot of times people share things on Facebook that are sad moments in their lives, or are tough cultural or social things, and often people tell us they aren’t comfortable pressing Like.”

We all wage this battle daily. When someone posts something about a breakup or shares an Eric Garner video, we may feel inspired to react, but a flimsy thumbs-up isn’t the way to do it.

But is the answer a Dislike button? Facebook’s still working on that, trying to figure out how to take something that inherently sounds so negative and use it as a “force for good,” as Zuckerberg said.

He’s definitely right about the Like button not being appropriate for everything, but it’s difficult not to imagine legions of Facebook trolls out there who will immediately begin abusing the Dislike button. Honestly, I know a handful of my own jerk friends who wouldn’t hesitate to pull that trigger on someone’s personal post just to be “funny.” I think Zuckerberg might not realize the depravity we normals wallow in.

In other news, the Q&A revealed that Zuckerberg has come incredibly far as a public speaker (remember these days?), that the real-name policy isn’t going anywhere, the CEO’s New Year’s resolution this year was to write thank you notes every day, Facebook is relishing its place as a platform for public discourse, and more apps are in the works.

You can catch highlights from the event below. Skip to the 33-minute mark for a hilarious interaction in which a local resident calls out Facebook for increasing home prices and a short misunderstanding results in Zuckerberg saying “my bad.”

And with that, let us leave you with a Zuck gif.