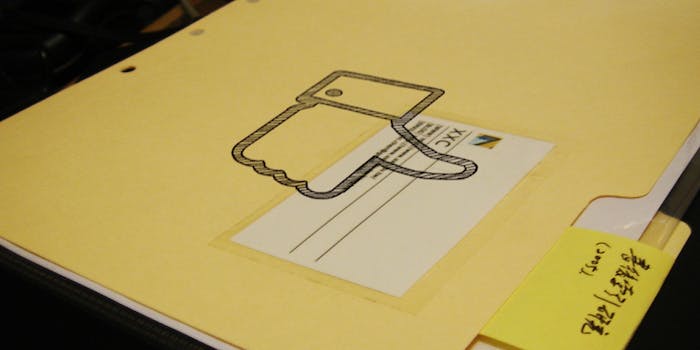 Burlington, Vermont-based startup Designbook has been operating quietly for under a year, building up a peer-to-peer marketplace for emerging businesses and entrepreneurs. After filing for trademark applications in September, the little startup received word that it had caught the attention of a much larger company with a name that ends in “-book.”

Facebook recently gave word to Designbook that the social networking giant would oppose Designbook’s application in attempts to block the trademark from being registered by the United States Patent and Trademark Office.

“We were quite surprised Facebook opposed our trademark,” Designbook co-founder and Head of Product Kyle Clark told the Daily Dot. “Unfortunately corporations abuse the trademark system to offensively gain marketshare. They see a small business that can’t reasonably defend itself in the formal process and pick an easy fight.”

Designbook is not the first company to invoke the wrath of Facebook; it has aggressively pursued any perceived infringement on its trademark in the past, ranging from shutting down pet social network Petbook to getting an educator-centric networking site Teachbook to change its name.

If the word prefix “Face-” or suffix “-book” appears in a social networking service, app, or photo product, a call from Facebook can be expected. Designbook checked both boxes.

Facebook did contact Designbook’s attorney prior to filing the trademark opposition to make the company aware of its position, but Designbook chose not to make any changes to its operation, holding that his service is not in Facebook’s field of social media and Facebook is not in Designbook’s space of crowdfunding.

“It would have been great to have a less formal conversation than a formal exchange of email if we thought that this was going to go any further than that,” Clark said. “But certainly, they have a strategy and a huge track record of doing this to businesses.”

As for the name, Clark claims that the name is not made to invoke Facebook but is instead a reference to an ideas book used in engineering school. “The name ‘Designbook’ is exclusively a reference to the blank books innovators have been using for many years to organize their thoughts, teams, and ideas. A design book is a specific thing.”

Clark remained firm on the name, insisting “changing our name is certainly off the table.” However, if presented information that shows Facebook to be active in the areas in which Designbook operates would potentially convince the company to make changes.

“Changing the areas that we have a trademarks in… we’re reasonable guys, that’s more something we would consider. But I haven’t seen anything that is compelling in that Facebook has been for years operating without my knowledge in crowdfunding,” Clark said.

Clark said he’s heard from “hundreds of startup companies in the last few days that have been unjustifiably derailed because of these tactics,” and has found Facebook’s actions to be common practice. In an interview with Boston magazine, Clark called it “trademark extortion and corporate bullying.”

“It’s interesting with FaceTime for example, from Apple, they don’t oppose it. But when somebody launches something called ‘FaceMash’ they do opposite it—when it’s a small business,” Clark explained.

He shared a sampling of a list of companies in similar positions, eventually challenged by Facebook and forced to change or abandon their product. “Some of this stuff they’re just kind of shotgunning and throwing their legal team at them,” he said.

Clark believes the trademarks held by Facebook and other companies are too overreaching and enable the kind of action Facebook has taken against Designbook.

“I would challenge anybody to say that there’s any application being developed right now on the Internet that doesn’t have some element of social networking, whether it be a blog, a forum—something that lets people communicate,” he said. “In the dynamic webspace that we’re in on, it always includes the human component, and you can’t ignore that. There’s a big difference [between] a social media outlet and a community online.”

Despite the opposition from one of the world’s largest companies, Clark says Designbook will press on. He calls Facebook’s actions “a distraction” but insists “our plans at Designbook haven’t changed.”