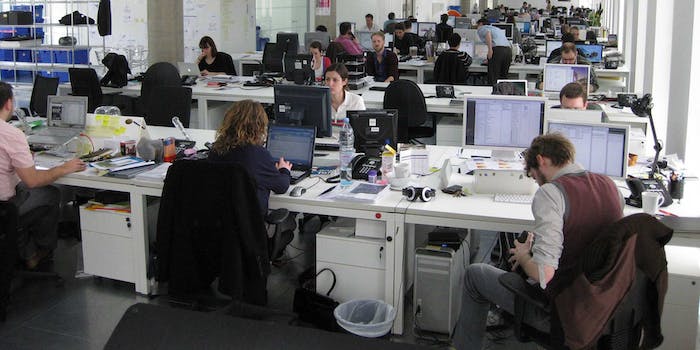 Facebook started as a social network for college students, but it graduated some time ago. Now the company is ready to button up and join the workforce with Facebook at Work.

The product allows businesses to build their own, insulated social networks for their employees.

Facebook at Work is designed to mimic the ubiquitous social network in look and feel, with the News Feed, chat, groups, and user all present. Users will be able to build a new profile or link their existing Facebook accounts, but a wall will remain up between personal and professional profiles.

The one thing absent from the Work iteration is advertising—at least for the time being, Facebook won’t track user data or slap ads onto Work. Information regarding monetization or pricing for the enterprise service is non-existent thus far. Apps and document editing are also currently missing, though users are able to share files through the network.

At the heart of all this, Facebook is positioning Facebook at Work to be an email killer. And this isn’t the first time the company has touted a product as such. It killed off its failed @facebook.com email addresses back in early 2014 after realizing no one used the feature and that email was doing email just fine.

The work-centric networking market is already crowded, but Facebook is banking on the easy learning curve of its platform to make adaptation easy. Its feature set has services like Slack and Yammer in the crosshairs, and will have LinkedIn joining the fray soon with its own solution for coworker communications.

Facebook at Work, which has been a rumored project since June 2014, begins it slow rollout today. The platform is launching for a small group of pilot members, with a Web accessible version through the standard Facebook domain and a mobile app simply dubbed “Work.” If nothing else, it will save users a “close tab” click when their bosses stroll by.

H/T The Next Web |Photo via Phillie Casablanca/Flickr (CC BY 2.0)