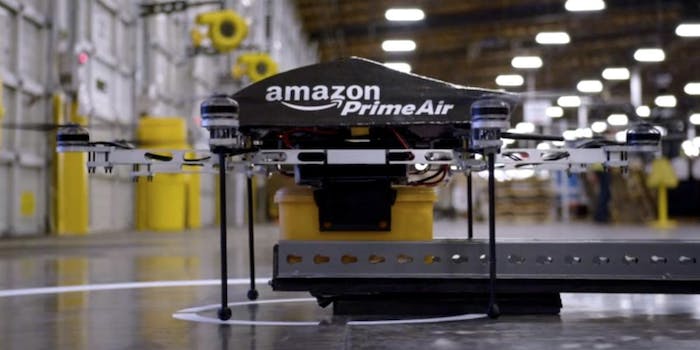 Everything you need to know about the new FAA drone regulations

This isn't what people expected.

After mulling the issue for some two years, the FAA has at long last introduced rules surrounding the use of private drones in the United States.

Reactions are mixed. On one hand, regulators have finally followed through and outlined a set of rules for would-be drone pilots. On the other hand, the new rules are quite restrictive, and big businesses like Amazon want something much more flexible and versatile so that they can take full advantage of the potential offered by unmanned aerial vehicle (UAV) technology.

What are the rules surrounding the use of drones in the US?

The new FAA rules allow for unmanned aerial vehicles that weigh less than 55 pounds to conduct “non-recreational operations,” meaning commercial flights. Use of these aircraft is limited to daytime hours, and the drones must remain within eyesight of the operator for safety reasons. Flights are also limited to an altitude of 500 feet and speeds no of 100 miles per hour. Finally, a commercial drone may not fly over people, except for its operators.

These are tight rules, but there is significant discussion about the idea of looser rules for much smaller drones that weigh less than 4.4 pounds.

So when will I be able to get my Amazon orders delivered via drone?

Not any time soon. Amazon’s proposed vision for delivery by automatic flying robot would certainly require its drones to fly at night and out of eyesight (not to mention over civilians, albeit incidentally). For now, these rules are quite a blow to the company, which first presented its Amazon Prime Air concept to the world in 2013.

Amazon’s been very bullish on delivery-by-drone. What are they going to do now?

Amazon has long known that this would be an uphill battle.

“The FAA needs to begin and expeditiously complete the formal process to address the needs of our business, and ultimately our customers,” Paul Misener, Amazon’s vice president of global public policy, said in a statement to the Guardian. “We are committed to realizing our vision for Prime Air and are prepared to deploy where we have the regulatory support we need.”

The official word on the Amazon Prime Air page is that the company is testing its systems in “multiple international locations.”

How do these regulations affect remote-control hobby aircraft?

They don’t! Those aircraft are governed by a different set of rules, specifically Section 336 of Public Law 112-95: 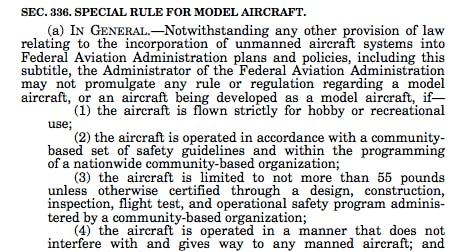 An entirely different set of rules for R/C airplanes.

What does Obama think about the new rules?

The Obama administration’s statement focused on privacy protections, whether or not drones will collect data, and how that data will be used. The Privacy Act of 1974, the administration said, “restricts the collection and dissemination of individuals’ information that is maintained in systems of records, including personally identifiable information (PII), and permits individuals to seek access to and amendment of records.”

This dovetails with similar concerns over civil-rights protections that the release also touched on. If your company wants to fly drones as part of its business, you’ll need to establish policies to “prohibit the collection, use, retention, or dissemination of data in any manner that would violate the First Amendment or in any manner that would discriminate against persons based upon their ethnicity, race, gender, national origin, religion, sexual orientation, or gender identity, in violation of law.”

So what’s the big picture?

Brendan Schulman, the lawyer who defended the first-ever commercial drone court case, told Daily Dot that while he is pleased that there is no airworthiness certification requirement, some of the operating restrictions will be a roadblock to very practical drone applications.

“For example, the line of sight requirement would seem to prohibit building inspections that involve flying around and behind a smokestack. As technology improves it seems to me that that restriction will need to be relaxed in order to enable some very valuable drone applications. And there is a restriction on night operations which could pose a problem for search and rescue operations or agriculture sensing. Night flying seems safe to me if the [drone] is well-lit by LEDs. The 500-foot ceiling doesn’t make much sense in parts of the country that are very remote or where the minimum safe altitude for manned aircraft is 1,000 feet.”

The FAA has taken its time in outlining these new rules. They represent only a baby-step forward, but we’re moving forward nonetheless.