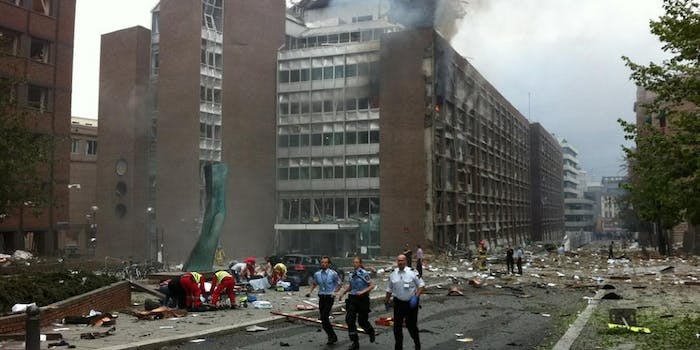 Reaction to explosion in Oslo, Norway

A huge explosion rocked Oslo this morning near the prime minister’s office. Twitter and Tumblr are the go-to places for raw pictures and unedited reactions.

While the Norwegian PM is reported to be safe and no causalities have been reported yet, there are a number of injuries according to Reuters.

A search for Oslo on Twitter reveals numerous first hand pictures and videos. Michael van Poppel, the founder of @BreakingNews (now under control of MSNBC), is curating the most stunning images and reports.

He tweeted a picture of a building on fire  and a bystander with a head injury. He also posted a link to YouTube footage of the blast scene moments after the explosion.

An Oslo resident named Morgan Flame also shot video titled “After Explosion in Oslo” which has since been retweeted more than 20 times, included a retweet from NBC News.

Christian Aglen, who is also a resident of Oslo, is live-tweeting what he is seeing. He posted a picture of the blast area being cornered off by police. He exclaimed “this is undoubtedly one of the worst days in Norwegian history.” His TwitVid of people running from the scene garnered over 63,000 views in just 50 minutes.

Aglen tweeted a link to Blottr, a community-powered breaking news wire. A feature on Twitter curates pictures users have posted from the Oslo blast.

On YouTube, a search for “Oslo explosion” returns just a few videos. And over on Tumblr, the Oslo tag is gaining popularity with people sharing stunned reaction and pictures.

Birdflyinghigh wrote “What if it happens here next? I’m not going to sit around every day from now on and be worried about it, not at all. I’m just.. shit. It’s just, it’s always been just that – a threat.”

Another user blogged the quote “Blood is spilled all over town today.”

Authorities arrested Anders Behring Breivik, a Norwegian man with ties to ring-wing extremeist groups. Norway’s TV2 reports the man was seen near the Oslo buildings that were blown up moments before the blast.

In total, 90 people are in hospital beacuse of the blast with ten dead as a result of the shooting and seven are dead because of the bomb attack.

FastCompany is reporting the terrorists might have warned of the attacks by submitting a video to YouTube and posting it on Islamic extremeist message boards. But since Breivik has been arrested, the truth to those posts are in doubt.

On YouTube, people are voicing their opinions of the tragic bombing and shootings. A Norwegian vlogger named Apehodet posted a video talking about his reaction. “We’ve always been secure [in Norway],” he said.

Tumblr users shared a similiar stunned reaction. A post from Nina, a Norwegian illustrator, wrote she feels numb and called the attack “pure evil.” Roughly translated, she blogged: “We read news with my heart, for no one can understand how a man would justify such action for itself.”

An illiustration spreading through the Tumblrsphere combines the word Oslo and love.