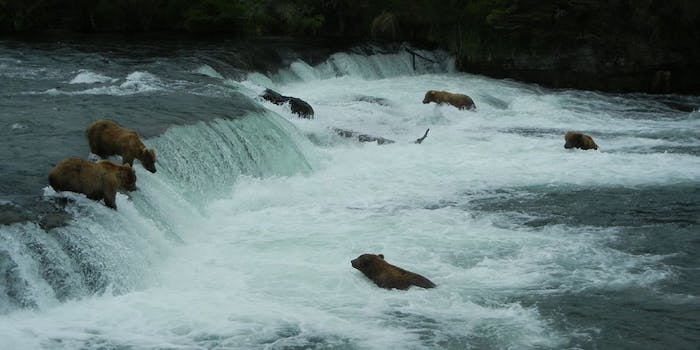 How one man turned nature into webcam-powered reality TV

As the Director of Explore.org, a philanthropic multimedia organization with a focus on animals and the environment, Charles Annenberg is on a mission to pepper the globe with webcams. But rather than looking in, capturing the action immediately in front of a glowing computer screen, Annenberg’s webcams are pointed out—focused on the least observed, most unscripted corners of the globe.

The Annenberg family made much of its fortune with TV Guide, a relic of old media that chronicles the best entertainment television has to offer. What Charles Annenberg is doing with Explore.org is, arguably, the antithesis of that.

The heir to the Annenberg empire believes he can showcase something far more compelling than your typical primetime lineup, all by setting up cameras in some of the most unique places on earth and letting people tap into the stream at will.

When a computer screen becomes a window

There’s a trope that pops up in movies every so often in which a character stumbles into an ominous room with a wall of screens stacked to the ceiling, all displaying a different image. Explore’s landing page of live cams is a less Orwellian and more awe-inspiring realization of that moment. Annenberg calls the visuals streamed from camera to computer screen the “pearls of the planet.”

Now over three years into the initiative, Explore has over 50 cameras providing a voyeuristic look into nature at its rawest and most impressive.

The live streams are a fulfillment of a lifelong dream for Annenberg. “What I really always wanted to do was connect people up close and personal with nature in the purest form possible,” he told the Daily Dot.

Once technology finally caught up with Annenberg’s idea, he was able to begin planting digital eyes that anyone with an internet connection could look through.

After getting started with a camera focused on polar bears in the Arctic, browse through the cameras now and you’ll be taken on a tour around the globe in just a couple matter of minutes: Watch osprey as they raise their young in Hog Island, Maine; bounce over to the camera set outside a watering hole in Mpala Reserve, Kenya for a glimpse of everything from lions and giraffes to hyenas and gazelles; another click and you could catch a tiger shark swim by in Cape Fear, North Carolina.

Annenberg believes its the “future of zoos,” letting people see into the natural environment of animals rather than recreating them in shrunken space with barriers between the viewer and the critters.

And in some cases—like with the recently launched walrus cam set in Round Island, Alaska—Explore isn’t just showing the natural habitat; it’s preserving it. “The island is going to be completely closed,” Annenberg explained. “Because of the demise of oil prices, the park services in Alaska had to make huge cutbacks, and we were able to keep the park open this season.” It’s made possible by the giving arm of Explore, which has awarded over $15 million to over one hundred non-profit organizations around the world.

Trying to fully quantify what Explore does is difficult. The organization has a broad mission—“to champion the selfless acts of others, create a portal into the soul of humanity and inspire lifelong learning”—that allows it to dip its toes into new waters.

What started as a venture in documentary filmmaking has evolved into a multi-headed beast, but at the core of it all is multimedia and a sense of connectivity.

“When Explore was first started, we really liked to go to places that were dominated by the media and show what’s really going on there,” Annenberg said. “Africa is portrayed by the media as the world’s big pity party. There’s AIDs, famine, war, disease, and cute animals sprinkled on top. But we don’t really see is there amazing amount of knowledgeable people doing incredible work.”

While the stream from the many cameras the organization has set up are free of cutaways and timely edits, Annenberg’s time working on documentaries enabled the idea. Thanks to relationships built and skills gained while making films, Annenberg always has a good idea of where to set up the camera and point the lens.

That seems to be the crux of Explore; one expedition always leads to another. As Annenberg turned his focus to work within the United States in 2008, he kept companionship with Lucky, a rescue dog who had gone “from the pound to the White House.” The travels with Lucky led to a Facebook page Dog Bless You, which turned into an effort to pair up service dogs with military veterans and others in need. Now, a puppy cam captures the maturation of great danes who will eventually be provided to people who have Multiple Sclerosis, Friedreich’s ataxia, and veterans with disabilities.

It’s Annenberg’s belief that the best way to feel connected to the natural world is to look at it without a filter. With the live streams, many of which are on nearly 24 hours a day, he has removed the need for polish and touch ups and has opted to let nature speak for itself.

“In traditional media, we so badly need the dramatization and a hook,” he said. In his estimation, that hook already exists; he’s just pointing the camera at it. “This is how it is. You just saw it in its purest form. That’s what’s so unique when you look at some of these cameras.”

It’s not just the wildlife that is shown uncut; Annenberg isn’t known for holding back his feelings when on camera, either. During a recent trial run of a new comment system, he told the audience, “I don’t know about you guys, but I think this is a piece of shit.”

“We’re very real here,” he said. “I don’t care what National Geographic or Discovery video you’re watching; when you edit, you manipulate. That’s the point of editing a film, to create currents of emotions to sway you.”

That’s not to say Annenberg doesn’t like a good narrative, he just believes they’re naturally occurring. Viewers who tune in to the cameras on a regular basis can watch the circle of life complete right in front of their eyes.

Ask Annenberg about his favorite camera, the one the watches over the brown bears in Alaska’s Katmai National Park and Preserve, and he’ll describe it as the most epic story ever told. “If Alaska is one of the world’s great natural cathedrals, that would make the brown bear the high sage,” he explained.

“The bears are going upstream, you have this river is going downstream. You have energy now, conflict. Then, the most heroic part of this story, is the salmon. They’ve been out to sea evading orcas and fishermen. Now they’re going on this journey up the river to jump over waterfalls, with bears who are going to eat them, so they can lay eggs and die. You have a whole Shakespearean story….You have salmon going upstream, bears going left to right, river coming at you. Now you have occasional seagulls, bald eagles, wolves, and moose coming out. You have a mystic fog in the morning that rivals Excalibur. There is no more beautiful shot.”

All of that is happening, live, 24 hours a day.

For longtime viewers, it’s hard not to begin building a bond with the animals on screen. “These people have been watching this stuff for hours every day for years now,” Annenberg explained. “They watch the nest build each year, they watch this relationship, they watch the eggs hatch. It’s emotional no matter which way you slice it.”

Annenberg himself feels the attachment, especially when watching his beloved bear cam.

“I’m just a big bear myself,” he said. “I love to eat, so I relate to the grubbing. I just want to pass out. It’s great, because if a bear eats too much, you’ll see them in laying in the grass with their bellies out.”

“I’m a dog person, and when you look at a big bear, they’re just big dogs, you know? The way they roll and rub their bellies.”

It’s that emotional connection the cameras create that eventually lead to people caring more deeply about what’s happening in these places they’ve never been.

The cameras depicts more than just animals; they show the environment as well. It sits in the background and is as ever-changing as the subjects in the foreground. Inevitably, once people become attached to the characters on screen, they begin to wonder about the habitat in which they live.

“I really believe the key to becoming an environmental steward is to develop an emotional connection,” Annenberg said.

With an audience that is heavily invested in these animals, it can be all the more devastating when one of the more unfortunate parts of nature takes place.

The osprey cam in Maine recently captured a trying moment when it showed an eagle swoop into an unprotected nest of newborn osprey and abducted them.

“The shock, the emotion, the outpouring was just crazy,” Annenberg said.

“The way I explain it is, there’s a double-sided coin to anything. The beauty of our cams is that it allows people to connect with nature in the highest form of purity. With that said, the dark side of that intimacy is accepting that the natural world is not the Disney film we all hope for. It’s valuable for all of us to appreciate the life we live in, and the balance between life and death.”

Those moments can be difficult to watch, but there’s value to be taken in not looking in away and in not cutting away. Explore regularly holds video chats with experts and with Annenberg himself which are used both for educational purposes and as coping sessions. Annenberg will hop on a Skype call with the audience and talk through the scene, and the thousands watching at home can turn to one another through the community forums.

“I think the fact that there’s such an outpouring shows you the power of these cams and how they connect these pure bonds,” Annenberg said. It’s like a family.”

The greatest solace for Annenberg, though, is knowing that whatever happens on screen—be it traumatizing or serene—it’s being seen the way it’s actually happening.

“What I said to the audience is, ‘you’ve made history.’ No one else has, as a citizen scientist on the planet, ever observed this. No one. The greatest researchers in the world didn’t even see this because it happened so fast, and you did.”

Explore takes its name seriously, regularly taking steps down the road less traveled to see what’s there. Now it’s bringing more people with it than ever.

“[Explore] has become a hub for a lot of people who have their own cameras and want to be a part of our community,” Annenberg said. The organization has been welcoming more streams into its growing list of feeds this year, and appears intent on continuing to capture as many of the best views nature has to offer. After all, it would be happening whether or not the cameras were there, so why not give people to see what they otherwise never would?

But don’t take the ambitious projects and expansion of Explore as aggression. “A lot of people ask me, ‘what’s your call to action?’” Annenberg said. “I just say, ‘to do nothing.’ Just allow yourself to relax and connect with the natural world.”

Whether you treat the cameras like a screensaver or like an action film, Annenberg is just glad to give people the chance to watch.

“When I think of the live cams, I think of them like an antidote to stress. So many people are overworked and the fact that you can just escape and see it is just an amazing thing in itself.”