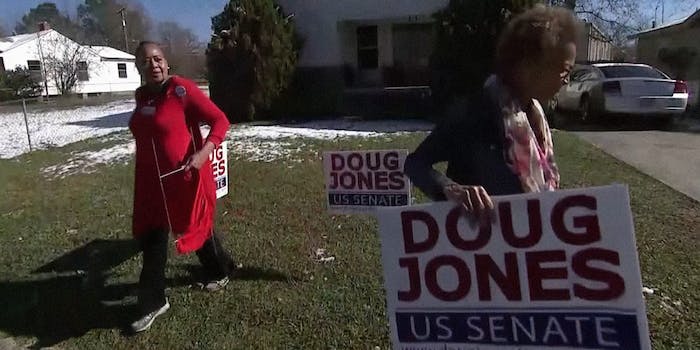 Jones defeated Republican opponent Judge Roy Moore by a margin of 1.5 percent, an improbable victory in a largely Republican state that may not have happened had it not been for weeks of revelations and accusations that Moore had romantically pursued and/or sexually assaulted women when they were minors and he was in his 30s.

However, exit polls show that Jones would not have been able to deliver such a defeat had it not been for Alabama’s Black voters—Black female voters, specifically—who voted overwhelmingly in favor of Moore.

Even prior to the election, polls showed that Alabama’s Republican voters weren’t going to be swayed by the sexual impropriety allegations against Moore. According to a CBS News poll from early December, 71 percent of the state’s GOP voters said they thought all accusations against Moore were false, while 17 percent believed the women. Exit polls grew more polarized on this sentiment, with 94 percent of Moore voters believing the allegations against their candidate are false, while 89 percent of Jones’ voters believed them to be true.

The effort led by Black voters to deny Moore the Senate seat didn’t go unnoticed across Twitter, with activists and critics alike pointing out that Black voters deserved praise for Jones’ win. Many advocated for white people to not just be aware of who turned out the vote, but also to support Black candidates, businesses, and institutions that are often overlooked.

Like I don't think people get that Black women don't turn out because of some maternal instinct to save everyone. We get usually hit first and worst by oppressive policies so we are saving ourselves. You just benefit.

If you’re going to say that the black vote can determine the outcome of a national election, then they should entitled to something worth of that influence!

The real tea is Black women saved themselves not y’all. pic.twitter.com/kuQdTsPHEx

Meanwhile, Moore called for a recount, saying, “When the vote is this close…it’s not over.”