A new approach may be paying off.

Federal nonviolent drug trafficking prosecutions fell by 6 percent in 2014 to an all-time low, according to new data.

Attorney General Eric Holder unveiled the findings Tuesday during a speech at the National Press Club showcasing his efforts to end the decades-long war on drugs.

“For years prior to this administration, federal prosecutors were not only encouraged—but required—to always seek the most severe prison sentence possible for all drug cases, no matter the relative risk they posed to public safety,” Holder said in a statement. “I have made a break from that philosophy.”

Mandatory minimum sentences have long been criticized as an unfair, overly harsh product of America’s fight against illegal drug-trafficking. Critics say the sentences remove power from judges and put it in the hand of federal prosecutors who have every incentive to seek longer sentences.

Supporters of mandatory minimums argue that the sentences are a necessary weapon against drug kingpins. As a result, dozens of states and the federal government have passed mandatory minimum sentencing laws in recent decades.

Attorney General Holder has made sentencing reform a core part of his work at the Justice Department.

At the National Press Club, Holder spoke broadly and critically about America’s enormous prison population—the biggest in the world—saying it “exacted a human and moral toll that’s impossible to calculate.” In recent years, federal prisons have accounted for approximately one third of the Justice Department’s total budget.

In his speech, Holder boasted that 2014 “saw the first reduction in the federal prison population in 32 years.”

Drug prosecutions are a key area distinguishing federal and state prosecutions. While drug offenses account for only 17 percent of state prisoners, more than half (52 percent) of all federal prisoners are locked up for drug crimes. 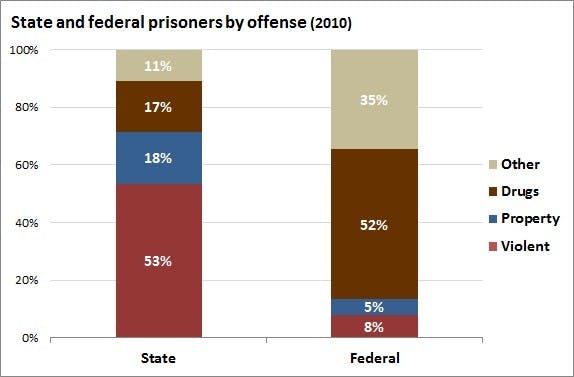 As attorney general, Holder has encouraged more “targeted decisions” on drug prosecutions, meaning that individual prosecutors have discretion in requesting certain sentences from judges. In his speech, he argued that the federal government had safely reduced its prison population “by targeting the most serious crimes” and “by ensuring that those who are convicted of crimes receive sentences that are commensurate with their conduct.”

Holder, one of President Obama‘s longest-serving cabinet officers, is in the process of resigning from office. His expected successor, Loretta Lynch, faces a tough confirmation process in the U.S. Senate. Obama has made it clear that he wants Lynch to follow in Holder’s footsteps by continuing to reform the process of federal drug prosecutions.