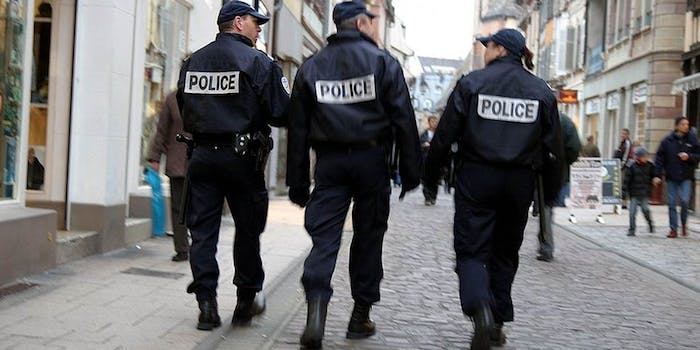 The man who shot him was not even technically a police officer.

A video released on Friday by law enforcement officials in Tulsa, Okla., shows police fatally shooing an unarmed black man and then mocking his cries of agony as he lay dying on the street.

The video, which was recorded on a police body camera on April 4, shows officers giving chase to Eric Harris, who was attempting to escape on foot. One law enforcement official takes Harris down. During the ensuing struggle, an officer can be heard yelling, “Taser! Taser!”

However, Reserve Deputy Robert Bates takes out a gun and shoots Harris at close range. “I shot him, I’m sorry,” Bates said immediately after pulling the trigger.

Immediately after the shot is fired, an officer can be seen leaning a knee on Harris’s head, as the suspect told officers that he was unable to breath. “F**k your breath,” one officer on the scene can be heard responding. Harris passed away about an hour later after being taken to a nearby hospital.

According to law enforcement, Harris fled on foot after the undercover officers he was caught selling a semiautomatic pistol to identified themselves. Officials have also alleged that Harris ingested PCP on the day of his death.

Tulsa Police Department spokesperson Sgt. Jim Clark said on Friday that the shooting was accidental. Bates had intended to reach for his Taser, but instead grabbed his gun. Clark insisted it was an incident of “slip and capture,” a police term that refers to when people make mistakes in highly stressful situations.

This incident is not the first time that a police officer has fired a gun at a suspect on the ground when they intended to reach for a Taser. On New Year’s Day in 2009, a police officer in Oakland, Calif., fatally shot unarmed African-American teenager Oscar Grant, who was on the the ground at the time. The officer, Johannes Mehserle, claimed he was reaching for his Taser and accidentally pulled the trigger on his gun instead.

In Harris’s case, there may be a good explanation as to why Bates made a mistake. Bates isn’t technically a police officer. He is a 73-year-old insurance executive who has donated thousands of dollars to the Tulsa Sheriff’s Department and serves as a member of the department’s 130 volunteer citizen reserve deputies.

Tulsa World reports that Bates had donated both vehicles and weapons to the Sheriff’s Department after joining the reserve deputy program in 2008. “There are lots of wealthy people in the reserve program,” Clark told Tulsa World. “Many of them make donations of items. That’s not unusual at all.”

ThinkProgress notes that Bates did serve as a full police officer in the past. But that was only for a single year and that service ended almost exactly 50 years ago.