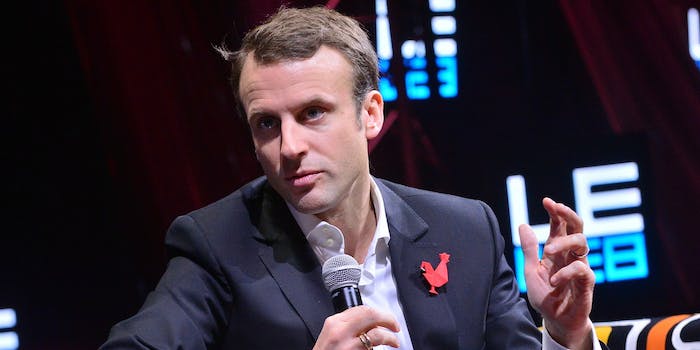 This is a painful defeat for the alt-right.

Emmanuel Macron defeated Marine Le Pen in the French presidential election on Sunday, dominating the final round of voting with about 65 percent of the vote, according to projections. The outcome represents a major victory for the political left and center in France and a decisive loss for the far-right National Front party, of which Le Pen is the most prominent public face.

In the end, despite a sense of caution and concern owing to the unexpected election of President Donald Trump last year, it seems as though the pollsters and conventional political wisdom were borne out this time. While Le Pen finished second in the first round of voting, securing a spot in a head-to-head runoff with Macron, the En Marche! candidate always led her in the polls by double-digits and widened his lead in the final days after a televised debate.

Thanks to recent “populist” outcomes in high-profile elections in the U.S. and Britain, as well as Le Pen’s radically anti-Islam rhetoric, the French election garnered far more international attention than it normally would have, becoming a sort of proxy for similar political battles between the center-left and far-right around the world. As such, the news of Macron’s victory has been met on social media with equal measures of relief, glee, and schadenfreude by opponents of the current brand of right-wing nationalism, while the alt-right is none too happy.

The French vote is posted. pic.twitter.com/QC8AzGLbsy

Congratulations America, the land of Marshal Pétain is now doing a better job of rejecting fascism than you are.

Today, France rejected that fear in a landslide.

French far-right's previous record was 18% in 2002. Westerners were aghast then, but it's set to double in 2016 & that's seen with relief https://t.co/czlIGuPFNo

Looks like loser Le Pen still got about 11m votes — and about twice the share of the vote her father got in 2002.

As Nate Silver of FiveThirtyEight notes, Macron looks to be outperforming his polls by nearly seven points, which would be a larger polling error in his favor than the one that put Trump over the top in last year’s presidential election. All in all, it’s a thoroughly conventional end to an election that came to represent much more than just the political state of affairs in France. It also means that Le Pen’s promises to withdraw France from the European Union will go unfulfilled, at least for now.

It’s worth noting that her performance was strong in a historical context, however. When her father, the far-right Holocaust denier Jean-Marie Le Pen, made the final round of voting in 2002 he finished with a scant 17 percent of the vote. The younger Le Pen has doubled that share of the electorate just 15 years later.

It was not, however, enough to lead her to victory. While she’ll still be a present force in French politics as a parliamentarian, she won’t be able to take aim at the presidency again for at least five years. Which means it’ll be at least five years before the people of France may once again need to weigh in on a global debate between the center-left and far-right nationalism.