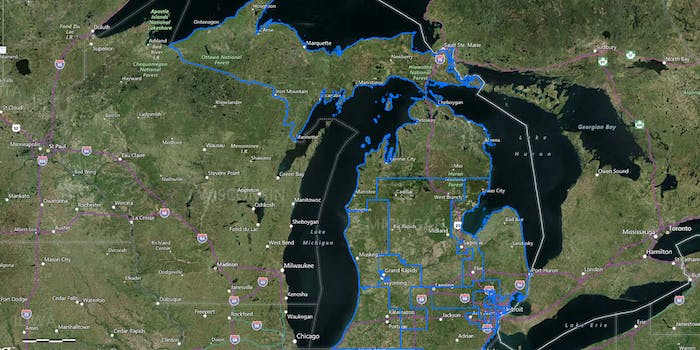 Emails reveal Michigan Republicans were super stoked to do some gerrymandering

One email says the wanted to pack 'Dem garbage' in specific districts.

Emails from Republicans in Michigan show they were intent on gerrymandering legislative maps that crippled Democrats and joked about how it would affect specific lawmakers, according to a new report.

The New York Times reports that emails that were unsealed in a court filing as part of a federal lawsuit regarding partisan gerrymandering.

One of the emails, according to the news outlet, shows how Republicans wanted to put “Dem garbage” into districts in Michigan they already control and pack Black voters into a district near Detroit.

“In a glorious way that makes it easier to cram ALL of the Dem garbage in Wayne, Washtenaw, Oakland and Macomb counties into only four districts. Is there anyone on our side who doesn’t recognize that dynamic?” the email says, as reported by Bridge Michigan, a part of The Center for Michigan, a think tank.

In another email, a district that was shaped like a finger was jokingly referred to as giving the finger to Rep. Sander Levin, a Democrat.

“Perfect. It’s giving the finger to Sandy Levin,” the person wrote. “I love it.”

The federal lawsuit that brought the emails to light argues that Republicans in the state created unconstitutional partisan gerrymanders that violate voters First and Fourteenth Amendment rights.

Gerrymandering has been a fraught issue in Michigan. Earlier this summer, a group collected enough signatures for a measure to be put on a ballot in November that would let a citizens redistricting commission draw the legislative maps.