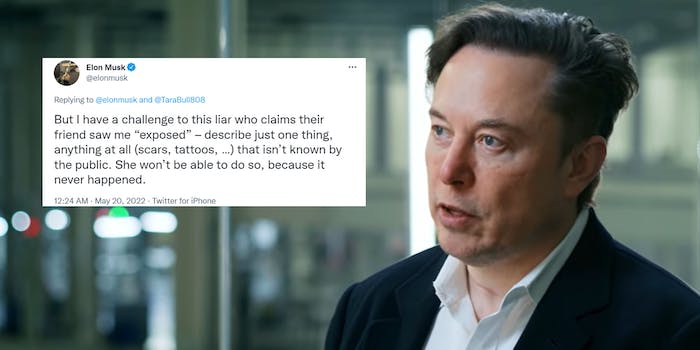 In a series of tweets late Thursday and Friday morning, Musk said the accusations are “wildly untrue.”

“I have a challenge to this liar who claims their friend saw me “exposed” – describe just one thing, anything at all (scars, tattoos, …) that isn’t known by the public. She won’t be able to do so, because it never happened,” he wrote.

Musk also took aim at the friend of the accuser, who leaked documents and emails to Insider.

“Exactly. Moreover, the ‘friend’ in question who gave the interview to BI, is a far left activist/actress in LA with a major political axe to grind.”

Musk appeared to try to get out in front of the story on Wednesday, tweeting that attacks on him “will escalate dramatically in the coming months.”

According to Insider, Musk sexually harassed a flight attendant working as a contract cabin crew member for SpaceX’s corporate jet fleet. According to documents shared with Insider, the incident—which took place in 2016—involved Musk exposing himself to the attendant during a massage on a flight to London. Musk allegedly offered to buy her a horse in exchange for sexual favors, according to the article.

“how weird is his dick that he expects she must have remembered it”, one user wrote.

“Damage control needs some work. 1) “I’m a Republican now.” weird opening move 2) “It probably wasn’t the first time I did this” 3) “I know exactly who alleged this thing I say never happened” 4) “She won’t be able to identify the tattoo on my penis,” wrote another.

“odd thing for a sex creep to want described in official court record!,” another said.

The Musk accusations come on the heels of a series of sexual harassment claims from SpaceX interns and employees, as well as claims of catcalling and groping from former Tesla employees. Late last year, a number of Tesla employees filed lawsuits against the company alleging harassment and abuse.