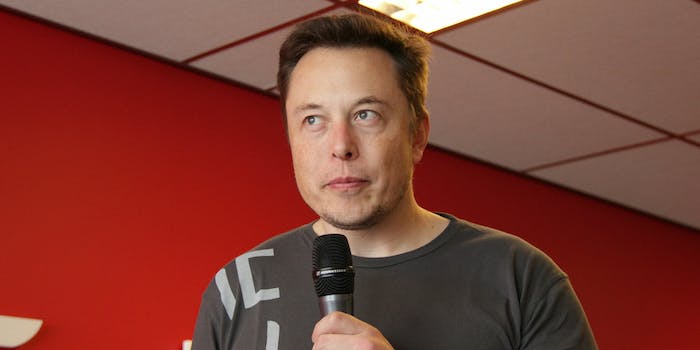 There are conflicting accounts from party attendees.

Elon Musk responded Thursday to rumors that he attended an alleged “sex party” hosted by a venture capital firm where attendees were reportedly taking an enhanced version of ecstasy and “stroking one another.” Musk disputes the description of the event, saying he didn’t see any inappropriate or illegal activities and thought he was attending a costume party.

Details about the event come from reporter Emily Chang’s forthcoming book, Brotopia: Breaking Up the Boys’ Club of Silicon Valley. Excerpts published by Vanity Fair on Tuesday don’t mention anyone by name but relay accounts from an anonymous “Jane Doe” of the June 2017 event. Change writes:

“Doe found herself on the floor with two couples, including a male entrepreneur and his wife. The living room had been blanketed in plush white faux fur and pillows, where, as the evening wore on, several people lay down and started stroking one another, Doe said, in what became a sizable cuddle puddle. One venture capitalist, dressed up as a bunny (it’s unclear how this fit into the edge-of-the-earth theme), offered Jane Doe some powder in a plastic bag. It was Molly. ‘They said it will just make you feel relaxed and you’re going to like being touched,’ Doe recounted to me.”

It was discovered by Axios that the party was held at the home of Steve Jurvetson, partner of investment firm Draper Fisher Jurvetson (DFJ). A Medium blog post by Paul Biggar expanded on those details. He says it was run by the staff of a “VC firm” and attended by portfolio founders, CEOs, and executives, including Musk. Biggar claims he saw Musk on the dance floor but stressed he didn’t see him or anyone else “do anything illegal, or having sex or taking drugs.”

“I don’t want this to be anti-climactic, but I didn’t see any sex or drugs. I went home at 12:30am, and I guess sex parties don’t really kick off until the boring fuckers go home,” Biggar wrote. “I didn’t exactly know it was a sex party, and I got bored at some point and went home. This wasn’t billed as a sex party; it was official party of the VC firm. But we were certainly primed for it — there was a sorta ‘wink-wink, nudge-nudge’ thing going on.”

A representative of Musk told Business Insider that the Tesla and SpaceX CEO thought it was a corporate costume party and spent the night talking about technology and business.

“Elon was at the party for a couple hours and left around 1am after talking with several DFJ-funded entrepreneurs about technology and building companies,” the representative said. “His impression was that it was a corporate party with a costume theme, not a ‘sex party,’ and there was no indication that it would become one after he left.”

Musk later directly addressed the incident in a statement to Wired, hitting out at Chang for “salacious nonsense.” His account of the party conflicts with statements from both Chang and Biggar.

“She conflated what happens in SF sex clubs in the Tenderloin, which have been around long before Silicon Valley was anything, with boring VC parties on the Peninsula. That is misleading to the public and she should be ashamed. If there are ‘sex parties’ in Silicon Valley, I haven’t seen or heard of one. If you want wild parties, you’re in the wrong place. Obviously. That DFJ party was boring and corporate, with zero sex or nudity anywhere. Nerds on a couch are not a ‘cuddle puddle.’ I was hounded all night by DFJ-funded entrepreneurs, so went to sleep around 1am. Nothing remotely worth writing about happened. The most fun thing was Steve lighting a model rocket around midnight.”

“My wife and I attended the party, along with around 200 people from industry, but we didn’t witness anything described in the Vanity Fair article,” Calacanis told Wired. “We were there for about an hour or two.”

While it’s still not clear what did and didn’t happen, DFJ has apologized for the involvement of its staff.

“We were dismayed to learn of behavior at the party that was completely at odds with DFJ’s culture, which has been, and will continue to be, built on the values of respect and integrity,” the company said in a statement. “We would never want anyone to feel uncomfortable and we are sorry if that happened.”

Clarification 7:03pm CT, Jan. 12: This article’s headline has been adjusted to recognize as rumor the nature of the party.