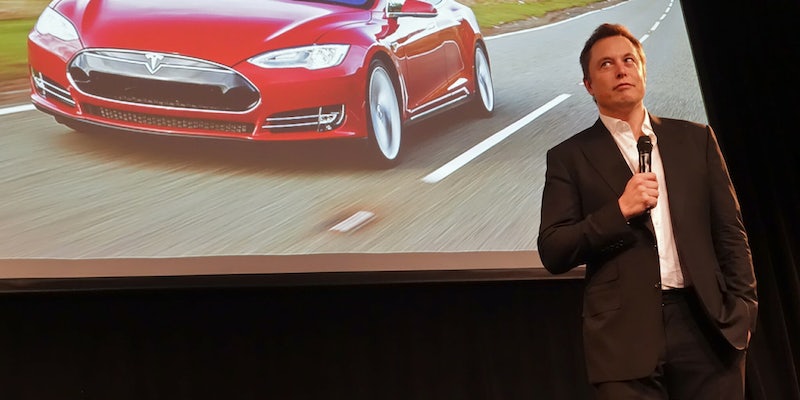 Photo via Steve Jurvetson/Flickr (CC BY 2.0)

What, do you have a better idea?

Elon Musk hasn’t been shy about sharing his plans for Mars in the past, and now he’s provided additional details to his plan to heat the red planet with nuclear bombs.Prompted by the possible discovery of liquid water on Mars, the SpaceX CEO used his time on stage at the SolarCity solar panel launch event in Manhattan to lay out his idea to create two pulsing “suns” over the planets’ two poles. The artificial suns would serve only as a temporary fixture, intended to heat it up to the point of being livable for humans.

Musk first floated the idea of sending nukes to Mars during an appearance on The Late Show with Stephen Colbert. On the show, Musk suggests there is a “fast way and a slow way” to raise the temperatures of Mars before sharing the fast way is to “drop thermonuclear weapons over the poles.” The idea is greeted by Colbert calling Musk a supervillain, to which Musk just casually responds, “Yeah.”

As it turns out, the plan isn’t to actually drop bombs on the surface of Mars but to have a continuous barrage of large fusion explosions that take place above the planet rather than on it. We’re not sure if this was meant to sound more reasonable than the original plan, but it doesn’t sound any less like a thing an evil genius would propose.Once his small, simulated suns warmed up the planet, frozen carbon dioxide would turn into gas and the greenhouse gas would absorb and trap heat. The atmosphere would thicken, water would warm, and it would create a cascading effect that would lead to a livable environment. At least, that’s what Musk believes.

The technology to actually pull off the proposal doesn’t exist yet, but Musk believes it to be feasible. He described the Earth’s sun as just a “giant fusion explosion” itself.