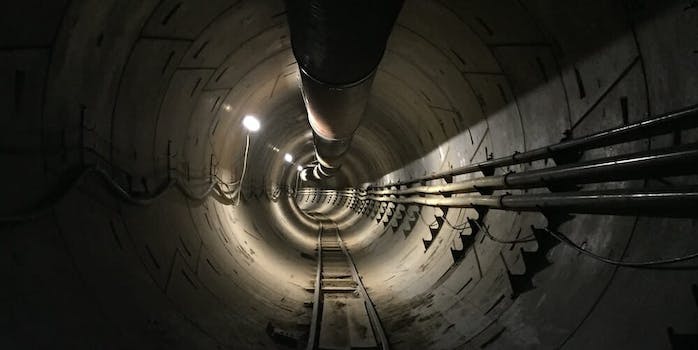 Elon Musk wants to build a tunnel to Dodgers Stadium

City officials are into it.

Elon Musk and the Boring Company want to change the way people travel to baseball games in Los Angeles. They want to meet with city council and have doctored up all sorts of interesting concepts about tunneling people from East Hollywood to Dodgers Stadium in four minutes. The mayor has tweeted his approval of the idea, and the home team is into it, too.

In October, Musk posted an Instagram image of the company breaking ground under the SpaceX headquarters parking lot in Hawthorne, California. The tunnel was a prototype of sorts, with the intention of proving underground tunnels were the best option to ease the traffic issues in and around Los Angeles.

In May, Musk was offering the public free rides in his near-completed Hawthorne tunnel.

The Boring Company now has its sights and drills on the area under and around Dodgers Stadium.

BREAKING: @elonmusk’s @boringcompany will build a 3.6 mile tunnel from East Hollywood to Dodger Stadium that can carry 1,500 fans to the game in four minutes versus the more than an hour those fans spend traveling by car to the game today. pic.twitter.com/v9joUxbsrE

From Wired: “The 3.6-mile tunnel would pick up near one of three LA Metro subway stations and run under Sunset Boulevard, ending in the stadium parking lot.”

The pod-like electric skates in the Dugout Loop could theoretically carry up to 16 passengers at a time with the ability to up to 150 miles per hour.

“We were excited when the Boring Company came to us with this project. Whether it is flying overhead in an aerial transit system or bypassing traffic through an underground tunnel, we are always looking for innovative ways to make it easier for Dodgers fans to get to a game,” Dodgers’ chief financial officer Tucker Kain told USA Today.

Unfortunately, the tunnel idea has some sticking points. The single tunnel will only run one direction at a time, park, and then wait in that spot until the event is over. It will do the same in the opposite direction after the game.

The skating vessels will be limited to just 1,400 total passengers, just a small percentage of the average number of fans that attend a Dodgers home game. The Dodgers lead Major League Baseball in average attendance with 46,801 fans each game.