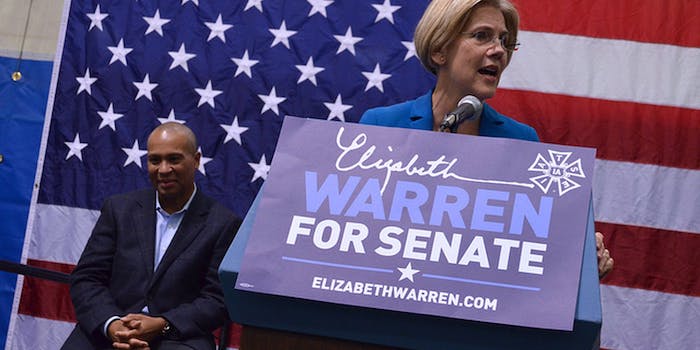 The Massachusetts Senate race may have ended in a decisive electoral victory for Sen. Elizabeth Warren back in November, but campaign drama is still being played out on Wikipedia.

The Massachusetts Senate race may have ended in a decisive electoral victory for Sen. Elizabeth Warren back in November, but campaign drama is still being played out on Wikipedia.

Editors of the world’s largest encyclopedia are currently debating how to handle Warren’s disputed claim to Native American ancestry. It’s a debate that’s attracting lots of attention online and raising concerns about how the site deals with partisan issues and current events.

During the campaign, Boston media outlets unearthed records from the late ’80s and early ’90s in which Warren was touted by Harvard University as an example of faculty diversity due to her self-reported Cherokee heritage. As journalists further investigated her ethnic status, Warren was forced to admit her claim to Native American ancestry was based more on family lore than the hard and fast genealogical evidence required by the federal government.

Although a Boston-area genealogist did uncover documentation to prove Warren is at least 1/32 Native American, it didn’t stop Warren’s incumbent Republican rival, Scott Brown, from trying to make political hay out of the situation. But it wasn’t much of a scandal: Warren beat Brown easily, by more than 200,000 votes.

Even though the issue was unable to derail Warren’s campaign, it’s still substantial enough to be included in the election’s historical record. Hence the renewed controversy on Wikipedia, where editors find themselves at odds over how much of the recently sworn-in Senator’s page should be devoted to the ancestry question.

Presently, on Warren’s page, the “Cherokee Self-Identification” story is summarized in 88 words with seven citations. This is much shorter than some Wikipedia editors would have it. Wikipedia Contributor Yopienso is one of those leading the fight for a more substantive recap of the controversy. She was the one who restored a longer, four-paragraph entry on the subject back in November after it had previously been removed by another editor.

The reasons for heavy weighting are twofold: the incident found a person in the public trust making exaggerated claims for her own benefit, and the U.S. is sensitive to Native issues. Note that this was not entirely a political ‘gotcha’ moment, but there was genuine anger from the Native community.

But other editors disagreed. Wikipedia Contributor Kevin Gorman said the longer summation of Cherokee controversy was blown up on Warren’s page compared to scandals of similar note involving other U.S. politicians.

I think that the section as it currently stands places pretty excessive weight on the incident. As it stands, it’s longer than her ‘government work’ section and almost as long as the rest of her senate section. Having looked across half a dozen articles about prominent American politicians on both sides of the spectrum, I can’t find a case where a similarly sized issue gets this much coverage. A mention of the incident is probably warranted, but I cannot imagine that the section possibly warrants the amount of length it currently has.

Gorman and others who advocate a more modest mention of the Cherokee incident cling to one of Wikipedia’s guiding philosophies: the Biographies of Living Persons rule page. BLP standards are intended to help keep entries neutral, fair, and well-sourced to avoid libel or defamation of character. A main subsection of the BLP guidelines relates specifically to the idea of keeping subjects proportional in length so as not to exaggerate the views of a vocal minority opinion.

Keegan Peterzell, a long-time Wikipedia editor, told the Daily Dot that BLP guidelines are designed to complement the overarching goal of Wikipedia: to allow open collaboration while still providing the best possible information.

“The BLP framework works hand in hand with our requirement that content be verifiable and written in a neutral point of view,” Peterzell said. “In a perfect, theoretical world, this eliminates ever having deep problems with a biography; most issues that subjects have with content about them can be resolved through a couple of channels that we have.”

And that seems to be the case with the Warren entry, as editors move toward a consensus in recent days. But debate still shines a light on the larger difficulty of trying to have neutral entries for inherently partisan topics. Similar debates have taken place on recent articles related to gun safety.

In general, the open-source nature of Wikipedia makes coverage of developing stories somewhat messy to cover. Newer, inexperienced editors often rub up against more senior contributors. A recent study by the Wikimedia Foundation found the sometimes tense relationships between editors may be causing a mass exodus of users from the site.