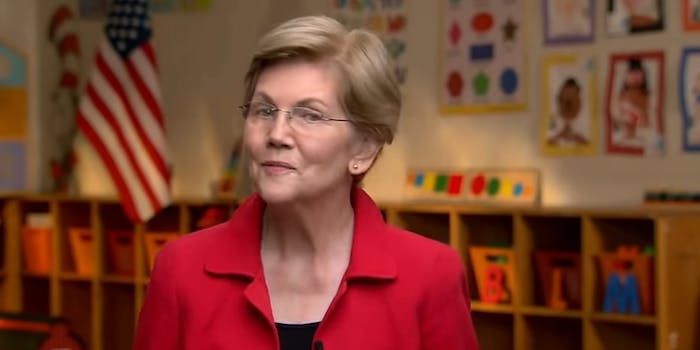 Not everyone was amused.

Warren spoke from a childcare center, with an apparent homage to the Black Lives Matter movement, in a time of great social unrest and racialized injustices. She, however, did not speak directly to the messaging, for which support is waning according to FiveThirtyEight.

The Massachusetts senator, who ended her presidential campaign in March, focused on affordable childcare, the COVID-19 crisis, and President Donald Trump’s failure to provide solutions or solace to the American people.

“COVID-19 was Trump’s biggest test. He failed miserably,” Warren declared Wednesday night. “Millions out of work. Millions more trapped in cycles of poverty. Millions on the brink of losing their homes. Millions of restaurants and stores hanging by a thread.”

“This crisis is bad — and didn’t have to be this way,” Warren said. “This crisis is on Donald Trump and the Republicans who enable him. On Nov. 3, we hold them all accountable.”

Yet another Easter egg referenced her presidential campaign. In a photo taken from another angle of her filmed speech, her campaign slogan “Dream Big Fight. Hard” – as “DBFH” – was spelled out in green letters.

Most took the messaging as positive and appreciated her subtle call-out.

However, some were displeased with Warren’s use of “BLM,” accusing her of using the movement as a prop.

Wrote @disco_socialist in a Twitter: “this is so insulting. it took liberals the better part of a decade to not balk at the sentiment behind BLM & now it’s alright because the prerequisite amount of white faces have put themselves in front of it. BLM is not about Elizabeth Warren.”

Even further, @TamanishaJohn tweeted: “Elizabeth Warren is also trending for having hardly visible BLM blocks behind her in a child classroom set up. It’s about as hollow and non-committed to Black people, policies, and issues as she was— but that’s the kind of things that liberals love…”