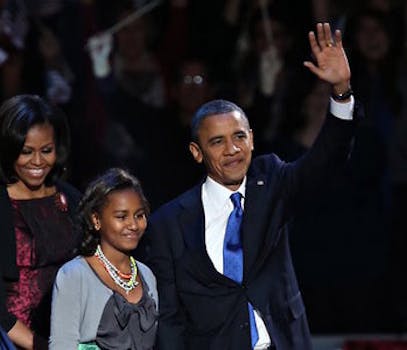 It was an election season filled with an endless string of gaffes, heated debates, and GIF animations that satisfied America’s addiction to easily digestible forms of entertainment.

And it all ended early this morning after President Barack Obama was reelected for a second term.

“America, I believe we can build on the progress we’ve made and continue to fight for new jobs and new opportunities and new security for the middle class. I believe we can keep the promise of our founding, the idea that if you’re willing to work hard, it doesn’t matter who you are or where you come from or what you look like or where you love,” Obama said to a raucous and exhausted crowd in Chicago. “It doesn’t matter whether you’re black or white or Hispanic or Asian or Native American or young or old or rich or poor, abled, disabled, gay, or straight. You can make it here in America if you’re willing to try.”

While Tuesday evening’s election results did not have as many over the top expressions ripe for GIFing, the day long build-up to the big announcement proved to be exciting. Tales of malfunctioning voting machines, strange search engine results, and the New York Times’ Nate Silver’s bold predictions helped fill the news cycle as millions of Americans flooded polling stations.

These stories, as well as the speeches from Obama and Mitt Romney, were the source of inspiration for 10 original Election Day GIFs created by artist Jason “challenger” Reed and the Daily Dot. Check them out below.

All GIFs by Jason Reed and Fernando Alfonso III; main photo via duanium