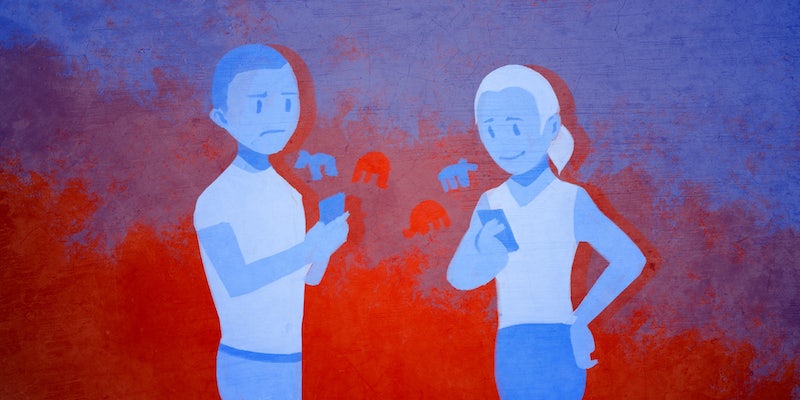 Here's a look back at the presidential hopefuls and their greatest teen moments.

Teens are thought leaders. Nothing is cool unless a teen declares it so. As the frontiersmen and women of the internet—one of democracy’s greatest tools—their opinion really matters, whether they’re eligible to vote or not. And, once they’re able to legally cast their ballots, the fate of the parties lie in their angsty hands.

Presumptive Democratic nominee Hillary Clinton appeared to have won over the demographic on Thursday, tweeting at GOP opponent Donald Trump to “delete your account,” which ultimately garnered hundreds of thousands of retweets. But before we declare her a winner among the world’s toughest critics, let’s look back at how her former competitors have fared.

First, here’s a bit of a warm-up. As you may have noticed, former President Bill Clinton has been on the campaign trail helping to build support for his wife. One day in early April, Bill hosted an event at the United Federation of Teachers. The high-profile event was, by all accounts, a resounding success, but Bill’s magic moment didn’t happen until he was almost out the door.

“Right before I called out to him,” Ivan Olivo, a sophomore at The King’s College in New York City, told AOL, “I got the idea to take a face swap picture on Snapchat instead of a normal photo.”

Bill was not pleased, asking “What did you do to my face?” A member of his secret service entourage explained that it’s just an app the kids use nowadays, according to Olivo. The teen, or possibly newly-not-teen (sorry Ivan), immediately rushed home to back the photo up to iCloud. You know, in case Bill wanted it deleted. Pretty uncool.

On the GOP side, there was an odd cluster of teens asking for candidates’ help with their promposals. The presidential hopefuls complied, though not gracefully. Nonetheless, half a cool point.

Here's a video a nice Wisconsin teen sent me of Ted Cruz asking his date to prom for him. pic.twitter.com/hYqaCdSH1Y

This teen may have had a similar idea when she approached Marco Rubio, but she was simply too awestruck to speak.

Trump decidedly DGAF, as made evident by the many comments that have landed him in hot water. But when life gives Trump hot water, he has his staff blanch some bland fixings and turn it into a taco bowl—and these teens from Nebraska seem to love it.

“Being 18-years-old, being younger,” said Brody, he likes “that [Trump] doesn’t care about the quote unquote political correctness.”

His buddy adds: “Ordinary citizens say stuff like that, and I wouldn’t say that any of us are sexist for using any of those terms or making those comments. But if you take that away, then you lose the authenticity.”

And then there was Jeb! Bush, a candidate who was unabashedly himself. He met Zacharie earlier this year and left the 13-year-old with a small gift: a miniature turtle, which he apparently keeps many of in his pocket.

“Slow and steady wins the race,” Bush told the tween, referring to the story of the Tortoise and the Hare. It’s not too apt an allegory considering almost-Bush-3 was the early favorite (and then dropped out of the race), but Zacharie seemed to like it.

And then there are the Democrats.

Clinton was up against some tough intra-party competition with Martin O’Malley, who teens and non-teens alike deemed “hot” early on in the race.

Despite being the grandpa of the group, Sanders has quickly emerged as the teen favorite, however. And—let’s face it—Bernie knows his teens. When his fans, which include 15-year-old Jill Maul and her friends, learned their favorite democratic socialist was headed to Kansas for a rally, they knew they had to attend.

Words aren’t enough to describe the interaction that ensued that February day, but when it ends with teens screaming like you are a member of One Direction, (and you most certainly are not) you’ve probably won.