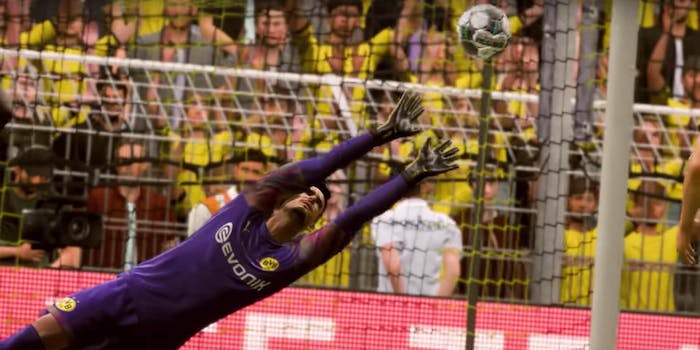 EA announced the FIFA 20 Global Series early Thursday and provided players with a link to register their information. As players, streamers, and pros flocked to their computers to sign up for the competition, they came across an issue: When prompted to enter their personal information, many players found that they couldn’t. Why? Because someone else’s was already there.

Players found themselves faced with the login information of strangers and, in some cases, well-known figures. People quickly began spreading the story online, sharing screenshots of the registration page. The pages were typically already populated with a stranger’s ID, email address, and date of birth.

“My friend got a big pull in the Data Breach pack,” one user joked. “Hashtag’s own Algerian Arrow, @YaniOurabah. We’ll send you a birthday card. What a mess.”

My friend got a big pull in the Data Breach pack, Hashtag's own Algerian Arrow, @YaniOurabah.

We'll send you a birthday card.

They were far from the only one. A number of well-known players were affected by the leak, including Ajax pro Joey Calabro. Not long after the news spread to social media, EA shut down registration on the website. It does not appear to be back up as time of publication.

In the meantime, players are continuing to voice their irritation and dismay at the leaked information. “Before I get to the absolute farce of that competitive bullshit, when you click the link register for verification you get other people’s personal information,” Kurt Fenech—who goes by Kurt0411 when competing—said. “This is a new low even for this joke of a company. I am suing.”

I bet it was Jeff on live chat who came up with the idea to leak everyone's details. He's already given imposters my details once or twice before.

This is not the first time EA has made enemies of its consumers. Countless issues over the years have alienated players, and the latest problem is no different. Hopefully EA will have the FIFA 20 issue fixed soon, but it may be down some fans by then.