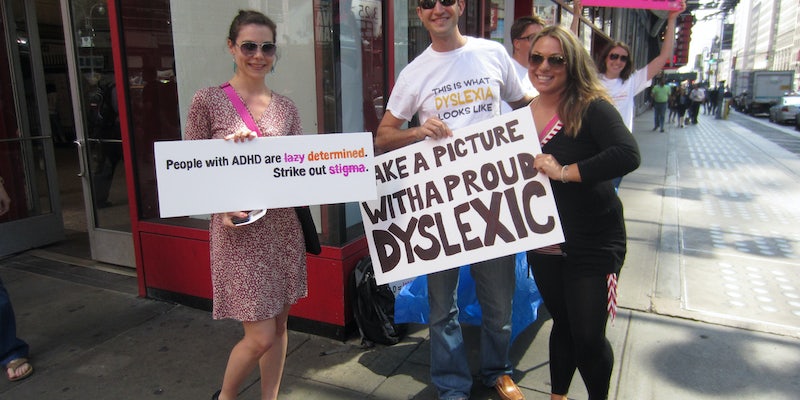 Photo via Eye to Eye National/Flickr (CC BY 2.0)

It’s one thing to know what dyslexia is. It’s another entirely to know how it affects people. A new simulation can help people better understand the learning disorder and the challenges it presents.

After talking to a friend who suffers from dyslexia, developer Victor Widell decided to write a program that recreated the experience for others to see. The result is “dsxyliea,” a simulation that turns Widell’s blog into a constantly changing display of text. Quartz used the code from Github to create a bookmarklet that can apply the code to any site.

What Widell’s friend described to him was a version of dyslexia in which letters “jump around.” It’s just one of the many ways that dyslexia can manifest itself; letters may also be seen backwards or upside down, shapes of letters can be confused, and full words may appear backwards or jumbled.

Dyslexia doesn’t just appear on the page or the screen. The condition can also be associated with other learning disabilities like Attention Deficit Hyperactivity Disorder (ADHD) and can lead to problems with more than just reading, including writing, doing math, and maintaining focus. It can also be tied to auditory processing disorder, which makes it difficult for a person to sort through sounds.

One redditor who claimed to be dyslexic said that Widell’s simulation was “accurate” but presented “a more extreme case.”

Others questioned how true the simulation was, including one user—who claimed to be school psychologist and who said “diagnosing dyslexia is my bread and butter”—who commented, “The whole letters-move-around-on-the-page thing is not it at all.”

Regardless of whether the code depicts with complete accuracy a naturally occurring disorder that medical professionals and researchers don’t fully understand yet, the simulation does recreate the experience described by some who have been diagnosed with dyslexia.

Most importantly, the simulation raises awareness of dyslexia, which affects one in five people, according to the Yale Center for Dyslexia and Creativity. Most people who have dyslexia go undiagnosed; only five out of every 100 people with dyslexia are recognized and receive assistance, according to the Dyslexia Research Institute.