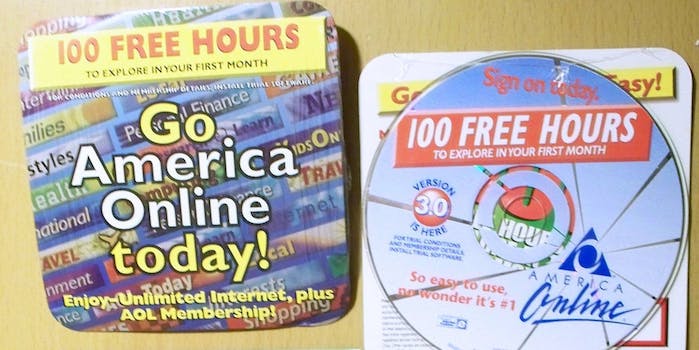 2.1 million people still use dial-up internet from AOL, and other mind-boggling facts

Just because you don't use it doesn't mean other people aren't.

If you pay attention to tech journalism, it seems like we live in a utopia of streaming devices, smart offices, robot thermostats, and cell phones that will order you lunch. But for a large chunk of society, these hallmarks of modernity aren’t part of their everyday lives; they’re still the future. Here are four long dying technologies that are still kicking, and the unexpected reasons why.

1) People are still renting billions of DVD every year

While Netflix is mostly known for its massively successful streaming service, the company still has 4.2 million customers renting DVDs each month instead. Redbox is even bigger, with 1,950 discs rented per minute and around 1,080,000,000 discs and movies rented per year.

For some film nerds, physical DVDs make sense because the selection is simply better, allowing them to watch anything—from cult classics to first-run releases—rather than relying on the limited streaming selection. However, it’s important to consider where another chunk of that user base probably comes from: folks with crappy internet. According to a 2016 FCC report, 10 percent of Americans (34 million people) lack access to 25Mbps/3Mbps internet. Over a third of rural Americans (39 percent) lack access to this high-speed internet, and of those users, 20 percent lack access to even 4Mbps/1Mbps internet speeds.

For these Americans, streaming isn’t an option, but getting a movie from Redbox or via physical Netflix DVD is.

2) 2.1 million people use AOL’s dial-up service to get on the internet

While the spread of fiber optic has helped catapult the tech industry forward in the last decade, millions of Americans are still left out. Rural Americans often have no access to high-speed internet, or it can be expensive and unreliable. Thankfully there are still phone lines and AOL dial-up. Yes, AOL is still selling dial-up Internet services to around 2.1 million people every year.

Beyond the slow spread of fiber in rural areas, cost is another factor to consider. AOL dial-up only sets you back $20 a month. If you only use the internet for email and reading the news, there’s no reason to pay for an expensive high-speed package. Still, the 2.1 million number is staggering when you consider how few high school students alive today could replicate the sound of a modem when asked.

3) Millions of offices still use fax machines, from doctors to entertainment companies

The fax machine may seem like an artifact of the ’80s and ’90s, but thanks to the aforementioned internet connectivity issues, they’re still popular in professional offices. Simply put, more people have access to a telephone than the internet, meaning a fax machine is always going to be an option for someone. In banks to doctors’ offices, faxing remains a normal form of communication. However there is one unexpected place faxes are seeing a resurgence: Hollywood.

Following the embarrassing hacks against Sony in 2014, many industry executives realized that email and smartphones have digital paper trails, which are far harder to hide than physical paper trails.

This last one might scare you: Some agencies in the U.S. government are still using outdated systems like Windows 3.1. In fact, some offices are using machines that date back to the 1970s, including at least one backup nuclear control messaging system in the Department of Defense that runs on an IBM Series 1 computer from 1976.

According to a PC World article on the issue last year, the U.S. government spends almost 75 percent of its IT budget maintaining legacy systems. Part of the problem is that many of these systems simply work. If it isn’t broke, don’t fix it, and spend the money somewhere else. The other issue is budget cuts. It’s hard to plan ahead for the future when you don’t know if you’ll have the money or staff left to finish a project. The result is a government that has almost no uniformity in what computer systems, operating systems, hardware, and technology it’s using across the board.