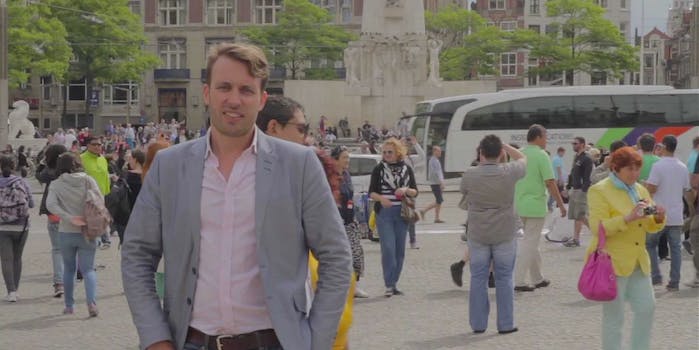 How Dutch politicians use Grindr to reach voters

Liberal candidates use the dating app to get supporters to the voting booth.

Any political consultant will tell you that the Internet has fundamentally changed the way candidates campaign. Would-be office holders have exchanged yard signs and bumper stickers for targeted emails and Facebook likes.

But a pair of Dutch candidates have blazed a new trail for online campaigning: They use the gay hook-up app Grindr to seek out votes.

According to Reuters, a pair of liberal Amsterdam politicians seeking local office have uploaded profiles to Grindr to pick up votes ahead of municipal elections scheduled to take place later this month.

“We are very fond of new technology and new media,” said Jan-Bert Vroege, an openly gay candidate for the D66 party, a liberal opposition party that ranks third in national public opinion polls.

He continued, “We are also into making Amsterdam a lively gay destination—and using Grindr, we can get that message to all the gay people of Amsterdam.”

Like most Grindr profiles, Vroege’s Grindr profile is seeking a date. Though when his profile ask “Have I got a date with you on March 19?” it’s a tongue-in-cheek way of reminding voters to cast their ballots for him on election day. The profile makes it very clear that the 37-year-old, 6-foot politician is only offering chats, not dates, as he already has a partner.

Another D66 candidate, Pieter Rietman has also taken a cue from Vroege. The bisexual candidate has created his own profile for the purposes of campaigning.

Though it might seem like an unorthodox campaign tactic, Grindr’s method of connecting users might make it perfect for a local election. Grindr uses GPS data to connect users within the same vicinity.

With the rise of mobile technology, political candidates have become obsessed with maximizing the value of data. Music streaming service Pandora recently began offering political groups and campaigns the ability to target potential voters based on what their musical tastes supposedly say about their political orientation. And some U.S. politicians now use custom-tailored ads that can direct individual voters to designated polling locations.