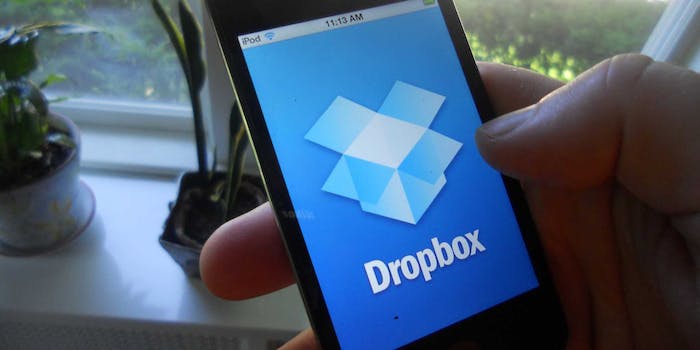 Activists say the cloud story service has been "poisoned."

It appears that one of the world’s most popular data-storage services, which boasts 300 million users, is once again blocked in the world’s most populous country, according to GreatFire.org, a website that monitors Internet blockages in China. The blockage is thought to be affecting both the Web and app versions of Dropbox.

One of the founders of GreatFire, speaking to The Next Web under an alias, said that Dropbox had been “poisoned,” a term the site uses to describe the “strictest method of blocking,” which shows that China “is willing to crack down on other foreign services more harshly than ever.”

Earlier this month, Google and all its services—including Search, Gmail, Calendar, and Translate—were reportedly blocked in China ahead of the 25th anniversary of the Tiananmen Square massacre, in what is believed to be a government attempt to stifle conversation about the incident.

This isn’t the first time Dropbox has found itself behind China’s “Great Firewall,” though the storage service had been unblocked in February after several years of censorship in China, The Next Web reported.

A handful of Twitter users have attested to the news that Dropbox is once again blocked.

@dropbox_support We were having great success with Dropbox in China in recent weeks and we’re having a lot of trouble today. Know anything?

As of publishing time, Dropbox Support has not yet replied to that last tweet (despite replying to plenty of other users), just as Dropbox has not responded to our inquiry into the matter.