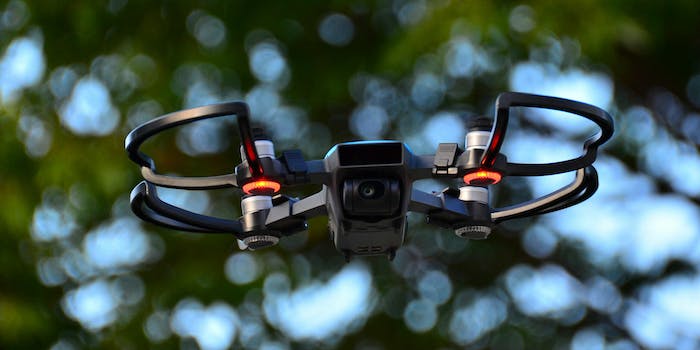 The agents were 'blind.'

A group of criminals reportedly used a swarm of drones to disorient the FBI during a hostage rescue operation.

A report from Defense One describes how small drones stormed the FBI making “high-speed low passes at the agents in the observation post to flush them.” The tactic worked. Joe Mazel, head of the agency’s operational technology law unit, said the agents were “blind” as the consumer drones flew above them.

“It definitely presented some challenges,” he said at the AUVSIXponential conference.

The suspects filled backpacks with drones you can buy at Best Buy and unleashed them in an area near the FBI. The drones were used not only to muddle the operation but also to surveil the agents. Captured video was uploaded to YouTube and sent to other members of the group so they could map out the FBI’s position. Mazel said counter surveilling law enforcement is the fastest growing use of drones among organized criminals. He didn’t offer any other details about the incident since it remains “law enforcement-sensitive.”

The account reveals one of many ways organized criminals are using consumer-grade UAVs for unlawful activity. Authorities have detected gangs flying them over police departments to get eyes on “who is going in and out of the facility and who might be co-operating with police,” Mazel said. A more commonly cited use is to scope out targeted locations during robberies to look for potential security vulnerabilities.

Criminals in Australia have even used them to smuggle drugs from ports by calling in false alarms when they notice security teams getting close to containers containing illegal substances. Last April, we learned fellow gang members of convicted criminals were using drones to smuggle contraband into prisons.

Government bodies and third-party agencies have come up with creative ways to combat these aerial pests. The most commonly referenced is a jammer, or a gun that neutralizes drones by blasting “electromagnetic noise” at high-frequencies to drown out communication between a pilot and the device. Jammers are illegal under FCC laws as they could potentially disrupt the communication of other electronics.

A more likely method for potentially fixing these problems is penning regulations that gives law enforcement more visibility over consumer drones, or that outlaws them in certain areas altogether.