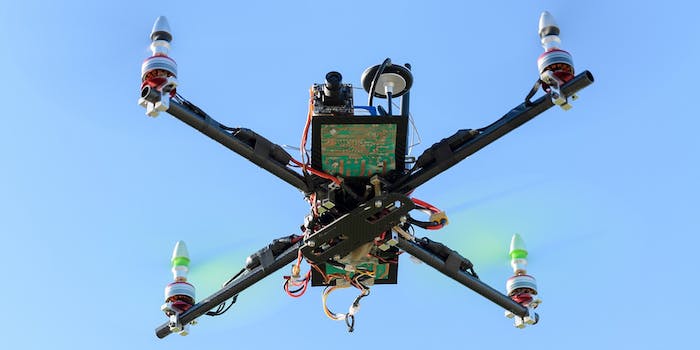 The task force believes that very small drones can still do serious damage if they strike a person or plane.

The task force advising the FAA on its proposed drone registration database has recommended that the agency require small drones be registered.

The 25-person task force, composed of representatives from industry groups and leading tech companies, suggested in a report submitted Saturday that the Federal Aviation Administration set the weight threshold for registration at half of a pound.

“Based primarily upon an assessment of available safety studies and risk probability calculations, and notwithstanding determinations in other countries with differing weight thresholds, the Task Force recommended an exclusion from the registration requirement for any small unmanned aircraft weighing a total of 250 grams (g) or less,” the report read.

“For those who choose to ignore the rules and fly unsafely, registration is a tool that will assist us and our law enforcement partners in finding them.”

The Associated Press, which first reported the news, noted that Canada’s drone registration weight threshold is 1 pound, while in Europe, it is approximately 2 pounds.

Consumer-level drones, also known as unmanned aerial vehicles (UAVs) or unmanned aerial systems (UAS), typically weight around one to three pounds. One of the most popular drones on the market, the DJI Phantom 2 Vision, weights just over two and a half pounds, including battery and camera.

Every drone owner who registers with the FAA will get a unique number that they must place on each of their drones. The aviation agency decided to distribute numbers on a per-person rather than per-drone basis to make things easier for drone operators.

“Registration will instill a sense of accountability and responsibility among UAS pilots, and also will prompt them to become educated about safe flying in the National Airspace System (NAS),” FAA Administrator Michael Huerta wrote on the Transportation Department’s blog last week. “For those who choose to ignore the rules and fly unsafely, registration is a tool that will assist us and our law enforcement partners in finding them.”

The FAA, caught off guard by the sudden rise in the popularity of drones, has struggled to ensure that regulations keep pace with technology. It issued preliminary commercial drone rules, but it soon began carving out exceptions for some companies, and it later tweaked the commercial rules following industry criticism. The agency also partnered with a few companies, including CNN and a major railroad owner, to test specific uses of drones.

As drone use has skyrocketed, so too has the number of drone-related incidents. Pilots reported 238 close calls with drones to the FAA in 2014. In the first eight months of 2015, that number nearly tripled to 650.

“Collaboration and innovation contribute to the safe integration of unmanned aircraft systems in the national airspace,” Douglas Johnson, CTA’s vice president of technology policy, said in a statement released Monday.

But Johnson also urged the FAA to back “solutions that support both safety and innovation,” warning against “duplicative or conflicting federal, state, and local policies” that he said would “encumber innovators, confuse the public, and limit growth.”

The FAA reportedly plans to issue rules for the database by Christmas, at which point they will be subject to a public comment period.