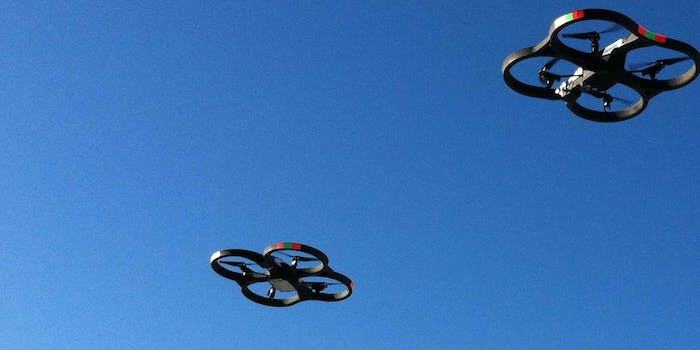 Dronecode is the future of the drone industry

Drones are about to get a whole lot smarter.

Since 2007, it has been illegal to fly drones for commercial purposes nearly everywhere in the Unites States. The Federal Aviation Administration is very serious about this prohibition, and it has stepped in to block everything from Amazon’s budding drone delivery program to a Texas-based search-and-rescue nonprofit’s efforts to use drones to locate missing hikers.

For their part, the American people aren’t much more comfortable than the federal government with flying robots hovering about their heads. In a recent survey, two-thirds of respondents said that any policy shift that would allow more domestic drone use would be a change for the worse.

This skepticism about drones from both the government and the public doesn’t phase Jim Zemlin, executive director of the Linux Foundation, who is launching an initiative to marry open-source ideology with drone innovation.

“For many many years, us open-source folks [who worked on software like Linux] were called communists and all kinds of terrible things,” he insisted. “People questioned the legitimacy of the copyright frameworks that open source guys were working under for a long time. There’s always been some uncertainly relative to that. But we’ve fortunately always been on the right side of history [with Linux] and we think that drones will be on the right side of history as well.”

Even though they cannot be flown commercially without special permission, drones are already creating a massive industry. One report pegged the future growth of the commercial drone market at $91 billion. With the launch of the Dronecode Project, the Linux Foundation is going to likely be sitting at the core of that industry for generations to come.

The first thing to understand about drones is that, deep down in their little robotic hearts, drones are essentially just computers with wings—or helicopter blades, as the case may be. Like all computers, they need an operating system in order to run. Until now, these operating systems have largely been based on proprietary code. Most were developed internally by the drone’s manufacturers and then held under lock and key.

This system is not particularly efficient, because it restricts the number of people who can work on a project to those inside a single company. If drone operating system design were open-source, however, then everyone with an interest in seeing better drones could contribute. There would be more people offering design ideas and more people double-checking their work. Sure, the project might lose some competitive advantage, but the final product will work a heck of a lot better.

Dronecode, which was formally announced earlier this week, is a collaboration between over 1,200 developers from a litany of different companies. It is led by former Wired editor-in-chief Chris Anderson’s drone manufacturing shop 3D Robotics and is aimed at developing open-source systems for all types of drones.

The variety of the firms involved shows just how much potential there is for drone technology. One participant is Chinese web giant Baidu, which likely sees potential in drones’ mapping abilities, Then there’s SkyCatch, which impressed Zemlin with its ability to provide real-time images of massive mining and construction sites to better facilitate resource management. And there’s cloud-storage company Box, which would seem out of place until you remember that camera- and sensor-equipped drones have the potential to generate a mind-bogglingly large amount of data and are going to need somewhere to store all of that information.

“Across construction, agriculture, and energy, drones are generating massive increases in digital data and content that needs to be stored, shared, processed in the cloud securely,” Aaron Levie, co-founder and CEO of Box, said in a statement. “Box is thrilled to support the Dronecode Project to power an open platform that will transform how individuals and businesses leverage drones across a number of industries.”

Just as there are lots of different applications for drones, there are also a lot of different types of drones. There are small drones that fly relatively low to the ground and big drones that hover really high up in the air. There are submarine drones that swim underwater and rolling drones that drive around on the ground. Despite all of this diversity, however, one of the Dronecode Project’s goals is to design a system that is applicable to as many uses as possible. That way, an improvement made in one area can trigger benefits across the board.

As an example, Zemlin unsurprisingly points to Linux.

Linux began as an enterprise server operating system for things like storing data and doing basic computing in big companies. Then its reach spread to high-performance supercomputers like the CERN supercollider and weather-forecasting systems. Next it was adapted for mobile devices—every Android smartphone is powered by Linux. Then it found a home in just about every modern television. More recently, it migrated to the financial services sector; it now runs every major stock exchange in the world.

“None of that was in the roadmap because there was no roadmap,” he explained. “This is the great attribute of open source. Through people coming in and using the source code to solve their particular problem, they were able to scratch their own itch and, at the same time, solve general purpose problems for others.”

One example of the type of cross-platform solution that Dronecode is set up to facilitate involves both smartphones and supercolliders. When developers working on Linux for mobile phones were able to make the system more efficient, those gains were also applicable to the particle-accelerating supercomputers at CERN. Advances in Linux smartphone implementation helped researchers probing the structure of the universe to reduce both power and cooling expenses, which were some of their biggest costs.

The Linux Foundation isn’t just managing the Dronecode Project because of the organization’s history of shepherding massive open-source collaboration. The hope is that this initiative will encourage the large community of Linux developers to turn their attention to improving drones.

“People can know that this code will be around for a long time and will be worked on by a large community of developers,” Zemlin said. “Also, I really needed an excuse to give my wife for why I bought $2,000 drone.”