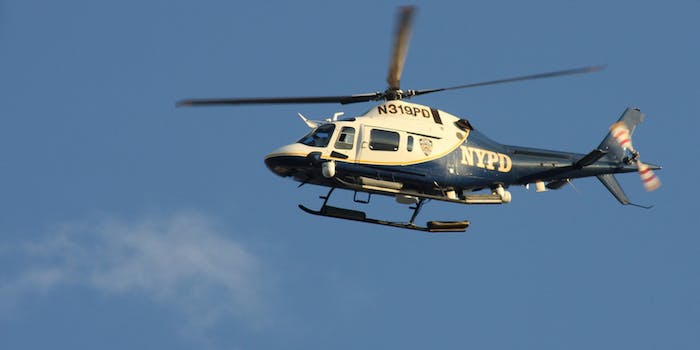 Careful where you point that thing.

As the murky legality of civilian-operated drones continues to create problems for beachgoers, Hollywood producers, and hapless suburbanites alike, the devices are bound to turn up in more and more criminal cases. Most recently, two men were arrested in New York and charged with first-degree reckless endangerment when a NYPD helicopter barely avoided a collision with a pair of drones. The men were allegedly flying them at an altitude of 2,000 feet in the wee hours of Tuesday morning.

The near-miss occurred just after midnight, not far from the George Washington Bridge, the New York Post reported. After changing course to prevent impact with the devices seen “circling” and “heading toward” the chopper, the police tailed them back to their landing spot, near Manhattan’s Fort Tyron park. Officers were dispatched to the scene, where they arrested Remy Castro and Wilkins Mendoza, locals who bought the drones just weeks before.

The pair protested in court that the authorities had overreacted. “It’s just a toy,” said Castro, who argued that the helicopter had approached their drones rather than vice versa. “We were just playing with it,” Mendoza said. “It’s crazy.”

Their lawyer, Michael Kushner, said the devices can’t go higher than 300 feet, though a friend claimed they had flown it up to heights of 5,000 feet.

Meanwhile, the FAA keeps missing deadlines to set regulations for commercial drone flight. Currently, it’s prohibited, with some case-by-case exceptions—but until hobbyists have some idea of restrictions on weight, elevation, and use, they’re likely to continue thinking of their drones as a source of harmless, law-abiding fun. In addition to other close calls with passenger aircraft, FAA officials noted, drones have been responsible for injuries, some lethal, to people on the ground. In the clip below, a drone crashes into the crowd at a Virginia bull run.

So keep watching the skies—even if you don’t spot a UFO, you may well save your own neck.