Still think Apple’s upcoming campus looks too much like a giant UFO to be real? This aerial construction footage ought to fix that. The best part of this video, though, is the fact that it was filmed by an amateur using a drone, proving once again that drones can indeed be used for good (or at least not for outright nefarious purposes).

The video, posted to YouTube by user myithz, is not the first to document progress on the Cupertino facility this way. Late last summer, a video by jmcminn surfaced, showing the first such images of the construction. However, myithz’s video, filmed at the beginning of this month, gives us a glimpse of the progress made since. In the update, we can see that the foundations appear nearly complete and that the first structural members are beginning to rise out of the ground with the assistance of enormous cranes.

The new Apple campus was the brainchild of the late Steve Jobs, who wanted British architect Norman Foster to design a sustainable facility that would bridge the divide that existed between Apple’s engineering and creative teams by housing them under one roof.

“We have a building that is pushing social behavior in the way people work,” said Stefan Behling, an architect at Foster + Partners, during a presentation to the Cupertino City Council in 2013. 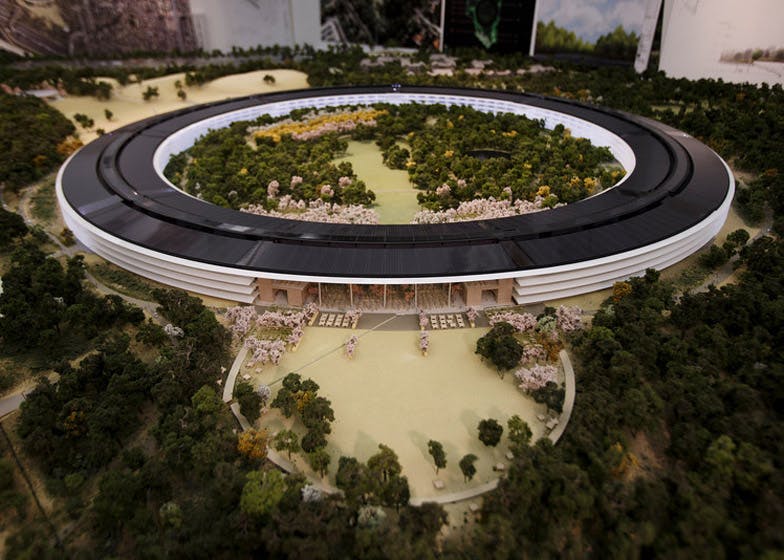 Not only does the campus want to enhance worker productivity, it will do so while setting a new standard for sustainable design. When completed, the campus will be composed of 80 percent green space and will be powered by 100 percent renewable sources, including one of the largest solar arrays in the world. The project is scheduled for completion next year at an estimated cost of $5 billion.